Posted by VarahaMihira Gopu at 10:28 No comments: Links to this post

In December, VR Devika of Aseema recommended my name to the editor of The Week,  to write an article on Aryabhata for their anniversary special issue "History of India through 25 people."

A week back, Venkatasubramanian Ramamurthy asked me to begin a series of weekly essays for the online edition of New Indian Express. The series is titled, "Shoulders of Giants". The first essay is on Alfred Russel Wallace, the great biologist, who discovered Evolution and it's primary mechanism, Natural Selection,  almost simultaneously with Charles Darwin, but sadly remains in the latter's shadow.

My blog is titled Ajivaka Wallacian, partly after Wallace.  When I wrote about the Wallace Line in an email a few years back, Badri Seshadri urged me to start a blog and not confine myself to emails.

I start a different blog in 2007 but only wrote a few articles, then gave it up. I decided to start this blog in 2012, on the day the Mayan calendar reset itself. I didn't know then that the two hundredth birthday of Wallace followed shortly on January 2013. What a sad state of affairs, that it was not celebrated by biologists with great fanfare. It would be a while before I wrote of Wallace and the Birds of Paradise, in Tamil.

My first public essay in my blog was about Haber and Bosch and their invention of a brilliant process to extract nitrogen from the air and make artificial fertilizer. It will be my second essay in the Express series, next week.

I'm grateful to Venkatasubramanian (RVS) for the opportunity to write for the Express! That too on science!

Posted by VarahaMihira Gopu at 15:56 No comments: Links to this post

Manjul Bhargava on Sanskrit and Mathematics

I attended the Lecture on "Sanskrit and Mathematics" by Fields Medallist Manjul Bhargava at the Kuppuswami Sastri Research Institute, Mylapore, which is part of the Sanskrit college. The following is my collection of notes, which I typed as he spoke.

I thought I'd be meeting a small set of students and here is a full house, he begins.

Rich literature in Sanskrit, which is disappearing. Europeans preserving Latin and Greek. Most nations, Germany France Japan South Korea, teach science and math in local languages, one source of their wealth. They use English as second language. It's much easier to learn concepts in local language at young age. Lucky my grandfather was a Sanskrit scholar. At home we had a great library of classical Sanskrit texts. I learnt the Sulba Sutra as a child, before learning from Western books in mathematics.

Pingala Chanda Sastra. I learnt a lot from Pingala. We have to do this scientifically, good translations, bring these alive in schools in correct accurate way. Repeats the phrase "correct accurate" several times.

(Brief interruption because some people can't hear properly. Actually I can hear, they may have a problem with the accent.)

There is an initiative at Harvard, the Murty Classical Library. Which publishes five books each year, mostly translations, in English. Books that have never been translated into any language. Hope we can see them in Tamil Telugu Hindi Bengali, all Indian languages. Most of the translators not Indian because most researchers are not Indian. Yes there is a website (in response to a question). Several mentions of this Murty classical library.

{Some one in audience randomly pops another question. And he is asked to wait until Bhargava finishes.}

I have a great interest in history of mathematics. I learnt quite a bit of math from Indian works and then I would go to school and find out theorems named after some one else!

In most of my research I went to the original sources - Gauss Hemachandra etc. Instead of learning from how people thought about a concept in later centuries you can go to original source and find why that person thought that way and where he got his ideas. Nice to learn in its basic forms. There are insights in original sources that have been forgotten in later references or text books.

I see debates in media about what ancient Indians or mathematicians knew. But they are often two sides just giving opinions with no evidence for what they are saying. Problem is some of these are not available in translation.

Not just translate but connect with the modern way of thinking. Not just Sanskrit but other sources too. How is it different? What inspired a concept? We need interests outside Sanskrit too.

Music and math interested me. Too vast literature, one has to specialise. Somethings I found about math. Only someone who knows Sanskrit and math can understand. And that's a small number. That is not acceptable.

I'll give three examples. "India's contribution to mathematics is zero." True, it's one of the contributions. India created the form in which numbers are used today. It  got transported to Arab world then to Europe who called them Arabic numbers. And now Indians call them Arabic numerals.

We have to wait for USA to change the terminology.  US mathematics text books now call them Hindu Arabic numerals, because India won't take the lead. Perhaps we will copy from USA. In the Arab world, they are called Hindu numerals.

This system of numerals is incredible and this is one of the greatest achievements in human history.

When Hindu numerals moved westwards they caused a revolution in mathematics but also in economics. You couldn't think about large numbers or more than a few thousand years. The concept that any number can be written with just ten symbols did not exist anywhere. And once it spread, it changed everything.

I feel ashamed that interest is greater outside India than here. India can help a lot.

There is a fantastic inscription in Gwalior. About 600AD. There is an even older inscription. Shahpur?

We liked to make large numbers and name them. Ten to the power 140. One word for this, in a manuscript I saw.

Phonetics of Sanskrit. Very important. Big revolution in 18th century after Europeans studied it. The Organization of sounds in Sanskrit is amazing. Two variables: one, the organ of speech,  where the sound is produced ; and two, eleven categories of modulation. This is Panini's contribution. You can't say of any other language that it's pronunciation has stayed unchanged for centuries. Basis of modern system of phonetics. Not just Sanskrit, Indian languages.

There was a big debate last year about Pythagoras theorem. Whether it was discovered in India. No shred of evidence that Pythagoras ever proved that theorem, whereas Sulba Sutra has clear evidence of proof.

Text books show no  historical context whatsoever. One gets no understanding of context and conditions under which some new concept was discovered.

Origins of trigonometry. Sine function originates in Aryabhateeya. The notion of jya is the origin of Sine and trigonometry.

Brahma Gupta is one of my great inspirations. One of the greatest mathematicians of all time. Gave the verse that translates to roots of quadratic equation. Every school boy should learn that. (Not integers??! ) . Negative numbers introduced by Brahma Gupta.

Objective clear history of development of ideas in India has never been written.

Pingala's Meru Prastara is called Pascal triangle in India. Is it clear in Pingala. Commentators before Pascal mention it. Meru Prastara shows one of the most important concepts in math and science, called binomial coefficients.

Yamatarajabhanasa. This sequence is not in Pingala Chanda Sastra but is in the oral tradition. What is the oldest written reference? Earliest reference is an English book in  1882. Balu sir mentions Don Knuth and Bhargava nods in agreement, but expresses frustration about not tracing it back to an older reference.

Calculus. Foundations developed by Madhava in India, which wrote in a mix of Malayalam and Sanskrit. Ramasubramaniam (of IIT Bombay) and his circle have brought this out, he says.

It may have been a slightly difficult lecture to follow for those not familiar with mathematics. The acoustics and the accent exacerbated the communication gap. But I found the speech delightful and ambitious. A Fields medalist with such a deep concern and curiosity about the history of mathematics, such a vivid knowledge of Sanskrit works, a deep passion to correct the fundamental lacunae in text book structure is a breath of fresh air.

His remarks on going to original sources, applies to every single field. I agree here most wholeheartedly. If pursued this is where the greatest good can happen in academia. Reading Aryabhata, VarahaMihira, Bhaskara, Lagadha in the original Sanskrit is a phenomenal experience. Even reading translations of their original works in English is far more informative than reading a book about them. This also applies to other fields. I have thoroughly enjoyed reading Adam Smith, Thomas Malthus, Charles Darwin, Henry Ford, Alfred Russel Wallace, Benjamin Franklin, GH Hardy, Thomas Huxley, in their original words. Even translations of Vitruvius, Plutarch, Al Beruni, Al Khwarizmi, Leonardo da Vinci etc. give us insights, which books about them simply cant.

Lynn Margulis mentions this philosophy of reading original sources in her description of course work at the University of Chicago.

I wrote a lament in September titled, "What did Brahmagupta do?" Bhargava's lecture answered that question  most resoundingly.

Brahmagupta discovered integers. This is a more fundamental breakthrough than even his sloka for the roots of a Quadratic Equation. And the Sulba Sutra of Apstambha gives the first irrational number, the square root of two. Bhargava mentioned Brahmagupta discovering negative numbers, but I don't think the public fully understands the impact.

They are obsessed falsely with Aryabhata gravity and revolution!  The Indian obsession with Pythagoras theorem also puzzles me. We should get a solid understanding of what Indians did rather than try to figure out how some India discovered something before some European - this sentiment reeks of an inferiority complex, not scientific curiosity. I think between Madhava and Jyeshtadeva they discovered infinitesimals. Whether this can be called calculus, I don't know. But I've not read either Madhava or Jyeshtadeva, so I can't judge. Newton and Leibniz discovered calculus after the advent of Cartesian geometry, which to my knowledge Indians did not develop.

My essay on Aryabhata in The Week
What did BrahmaGupta do?
VarahaMihira's Eclipse proof

Videos of Lecture series at IIT Madras on Indian Mathematics

Posted by VarahaMihira Gopu at 13:53 5 comments: Links to this post

This is a very broad and imprecise comparison of the dynasties that ruled Tamilnadu and Karnataka from the known historical sources. I drafted this for a lecture on temples, as part of Tamil Heritage Trust's January 2016 Seventh site seminar, tentatively titled Pattadakkal Pravesham.

A more detailed and precise timeline of these dynasties may be more useful for those history enthusiasts. This is similar to the Gujarat-Tamilnadu timeline I prepared earlier for our Fifth Site Seminar to Gujarat. 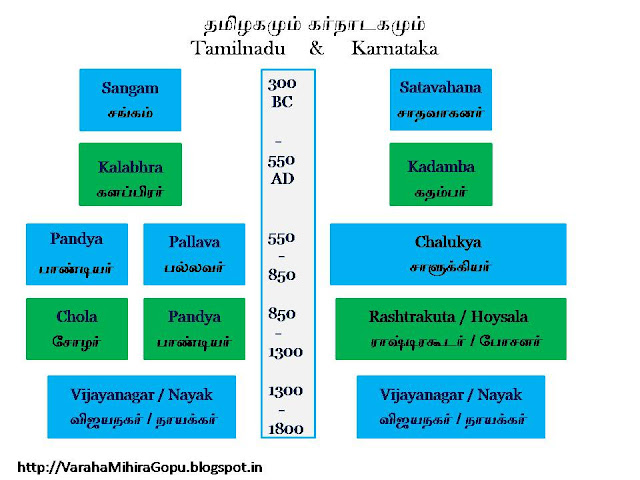 Posted by VarahaMihira Gopu at 12:59 No comments: Links to this post