In my second month in Texas, I was working in the Engineering Technology department as a graduate assistant, helping professors with Lotus 1-2-3 spreadsheets, writing macros. There were two other Indians also graduate assistants in the same department, Ravi Bhuthapuri (Telugu speaker, from Madras) and Ashok Mirchandani (Marathi speaker, from Pune, I think). One of the secretaries (Caucasian, Texan) asked us why we spoke to each other in English rather in "Indian".

We explained that we speak three different languages at home, and English was the common language. She asked us to demonstrate, so I spoke some Tamil, Ravi spoke some Telugu, Ashok some Marathi. She helplessly told us all three sounded the same to her; simply very very different from English (or Texan).
Then the phone rang and she answered it. We move away a couple of feet and talked to each other in English. She ended her call, then listened to us for a couple of minutes and innocently asked us, "So what language are you speaking now?"
First Side note
A few years ago, browsing some Sanskrit books at the KV Sarma library in Adayar, I found this dedication by ASP Ayyar, in a book of English translations of Sanskrit plays. Ayyar calls English India's fifteenth language and "as dear to Indians as the other fourteen". ASP Ayyar was a judge of the Madras High Court, and earlier, a novelist. 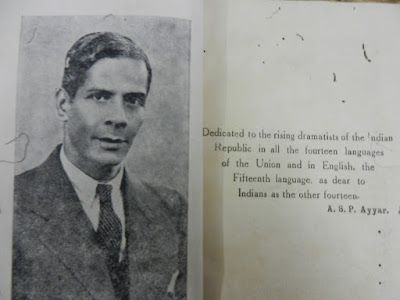 Second Side Note
Writer and intellectual, Chandrabhan Prasad, who used to write a regular op-ed column for the newspaper Daily Pioneer, claims English is the language of liberty for Scheduled Castes, and wanted to build a temple for the goddess for English in Banka, Uttar Pradesh. This essay says the temple was never built.
Other Rabbit-Roars
Blabberings about myself
Posted by VarahaMihira Gopu at 14:03 No comments: