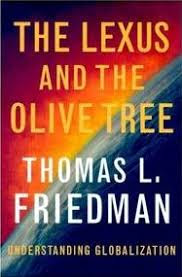 Guns Germs and Steel - 3 - Ten books that influenced me 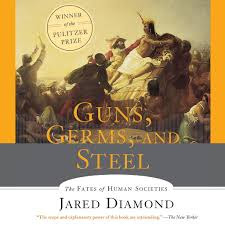 I bought this book in 1999, based on Bill Gates' incredibly concise and informative review, and ironically finished it between jobs.

This book changed my perspective on history, and provoked a curiosity for understanding linguistics, history, prehistory, agriculture, the evolution of technology, the cultures of tribes, etc. all of which have still not abated. Criticism that the book is very repetitive is not justified in my opinion, because Diamond packs so much information into it.

The book is an answer to a question by a Yali, an aboriginal native of Papua New Guinea, as to why different cultures and countries are so unequal, if there are no basic biological differences between the races. Jared Diamond's hypothesis is that it is geography, nor race, that determined the fates of human societies. He distinguishes between proximate causes (like steel weapons, immunity to diseases, organized armies) and ultimate causes (like domesticable plants and animals, coastlines, topography) which led to the undeniable differences among cultures or nations.

Then Diamond develops his thesis in the next six chapters, quite elaborately. His last five chapters, a tour de force of Africa, China, Polynesia etc are marvelous summations of their histories, and the forces that shaped them. I suggest searching for and reading Bill Gates' review to get a grasp on this book. And strongly recommend this book.

Tamil summary / preview of this book

Noddy - 2 - Ten books that influenced me 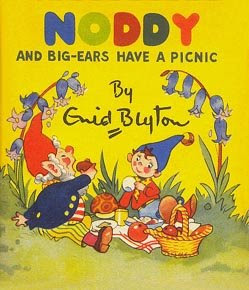 Garuda was the first comic book I read. Noddy is the first book I read, (or remember reading), that was not a comic book and not a school book. I first read it in the sixth class at PS Senior Secondary school. We had a library period, where a bunch of books were brought from the school library and kept on the teacher's desk; each student would go up and pick up a book, in alphabetical order as per attendance register. My name starting with G, I was seventh or eighth.

I happened to pick a Noddy one week, and loved the story and the illustrations so much, and the characters, and his little adventures, that every subsequent week I picked a Noddy story I hadn't read earlier. There were about forty of these Noddy books, and I remembered and loved each one. Today I dont remember a single Noddy story, but I remember how much I loved Noddy that year. There are much younger kids today who read much more complex and sophisticated books at those younger age, so I was perhaps immature for that age. Some of my classmates would discuss somebody called William (schoolboy stories by Richmal Crompton). These William stories were ten times as long, and I realized my level was Noddy, or comic books and I was quite happy. Sometimes I would bring the Noddy I took home the very next day, so I could exchange with some other student's Noddy book.

School was a sideshow to my Noddy reading life and career.

After a couple of months, some of my classmates got ticked off at my Noddy obsession. Some student suggested that alphabetical order should be reveresed, because the same students were getting the first picks every week. The teacher agreed. One guy yelled out "Let us all pick Noddy books so Gopu doesnt get one." I dont remember who it was but quite a few others laughed, evilly... more evil than Voldemort or PS Veerappa. It was a conspiracy. I would be denied my daily bread, my Tasmac bottle, my voters biriyani, my Art 19(1)sub a-c, my oxygen, my Facebook  ID, my... you get the idea. I waited in Abu Ghraib bench at this Dotheboys hall of a school, while the Noddy monopolizers cruelly snatched one desirable book after another.... until it was my turn... and stoically, like Socrates and Veerapandia Kattabomman, I walked up to the teacher's desk, my head held high, my eyes bravely fighting tears... only to find several Noddys still left. I smiled like the Man with No Name, like Virendra Sehwag facing the first ball, like Tripurantaka when he lifted his bow, like Uncle Fred in the springtime...and picked up one of the unread Noddys and walked backed to my desk not even glancing at Darth Noddymort.

By that year I had finished almost all the Noddys, and I doubt that Enid Blyton was about to write any new ones, so aftera couple of weeks of Noddy revisions, I moved on to other longer books by Enid Blyton, the greatest children's book writer in the history of the universe. The Five Find Outers. The Famous Five. Mallory Towers and other school books. I felt very jealous of England and English kids and their marvelous schools - I mean they had delicious things like marmalade and scones, while all we poor Indians had was paruppusili and vattal kuzhambu and poori kizhangu and such mundane stuff.....I suppose I was jealous until the age of thirty when I first tried marmalade, and never complained about Indian food ever again.

Noddy and Enid Blyton, were my alternates to the comic books that was really my ardent passion. Less visual, more imaginative, less spectacular, more relatable, longer, and longer, and developing my vocabulary better than all the unbelievably dull Tamil stories I was exposed to.....

In the eighth standard, I read the William stories of Richamal Crompton..and loved them too. And also stumbled upon a series called Alfted Hitchcock and the Three Investigators, first written by Robert Arthur, and then by other authors, fantastic adventure stories set in sunny California...not just adventures, mysteries, too. Solved by my first favorite detective Jupiter Jones, a schoolboy like me.

Because I was reading much longer books than Noddy now, I also accidentally read a book called The Gold Bat, a schoolboy adventure written by an author with a really weird name- Pelham Grenvile Wodehouse. And one of the short stories in my class text was called the Blue Carbuncle, and featured an older more famous detective than Jupiter Jones...

But my reading really started with Noddy.