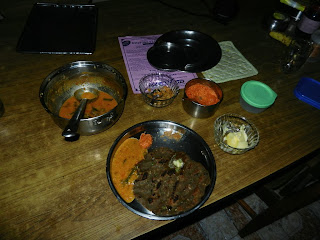 A temple in a river island

On Tuesday, Sept 24, with friends, Siva, Bhusha and VSS, I visited Vaayalur near the Paalar river, to see the temple accredited to RajaSimha and see his genealogical inscription of 57 generations of the Pallavas. There was only one pillar with his inscription. I could not read it because it was not clear and the light was harsh. But the folks there pointed us to another temple on an island on the other side of the Paalar, built by the much later Nrpatunga Pallava. This is the photo onthe left, but as you can see it is completely "modernised" with cement and paint and shutters, and if there are any inscriptions, they are all gone.


A lion sculpture, perhaps of Pallava antiquity stands mutely there.

But the locale is still beautiful and would be more so if the river had more flowing water. This was in a village called Paramesvara mangalam, probably a Brahmin settlement, commissioned by Paramesvara Pallava, son of Narasimha Varma, conqueror of Vatapi.

After this, we moved on to the nearby Naththam Paramesvara mangalam section of the village, which had another old temple modernised by recent activity - you can see the scattered old sculptures nearby, discarded like so much trash.


The priest said that some visitor told him that this was built by Paramesvara Pallava - if so it must have been in brick, because granite structural temples were begun by Paramesvara's son RajaSimha, as per scholars. The temple had a Chola structure, with the signature Lingodhbhava sculpture in the rear koshta.

The villagers believed that the Nrpatunga temple is older, but I told them he came 200 years after Paramesvara.

After we visited some megalithic burial site in Tirupporur and Siruthavur.

PS: Blogger seems to limit number of photos I can upload...

After Mamallapuram in 2010, our second Site Seminar was in Ajanta & Ellora in January 2011. I wrote the following essay in April 2011, after our visit, explaining why I was inspired to visit these two places. We called this trip Paranjothi yathirai...


Paranjothi Yathirai
About ten years back, in 1999, I read Kalki's epic historical novel, Sivakaamiyin Sabatham. It was one of the most fascinating books that I have ever read, not only because of the gripping story and Kalki's narration, but for its historical sweep, its foundation on reality, the fulsome admiration of and pride in the artistic, sculptural, literary, religious, military, technological, administrative and scientific achievements of our ancestors upto that era.

Add to this, the brilliance of the Mahendra Varma Pallavan and his fictional antagonist, the Buddhist bikshu, Naganandhi; and the depictions and descriptions of four wonders - Kanchi, Vatapi, Mahabalipuram and Ajanta, the last two of which have changed little. Here was the perfect recipe to ignite the imagination, wonder and curiosity of a soul that had dried up.
After my return to India, this inspired visits to Kanchi and Mamallapuram with altered mind and eager eyes, but an undeveloped sense of aesthetics.

I read several books on Indian history after that, all in English. AL Basham, Burton Stein, Abraham Eraly, Charles Allen, John Keay, ibn Batuta, al Beruni, even Jawaharlal Nehru. Among these Charles Allen most changed my perspective, opening my eyes to the contributions of the British to Indian history, art, sculpture, culture and heritage; not merely that they were one-dimensional colonialists as portrayed in our classroom syllabus or media coverage. I later became aware of Nilakanta Sastri and PT Srinivasa Iyengar, whose accounts of Tamil history take things to a whole other level. It was around this period that I also visited Ajanta, was blown away by the monuments of Ellora, and rather underwhelmed by the paintings of Ajanta, which were cryptic and chaotic.

Then came the series of lectures by Chitra Madhavan, the encounter with Prof Swaminathan, both quantum leaps, like my first reading of Kalki. If my artistic soul was ignited by Kalki, it was rasied to an inferno, by these two people. And I discovered that Mahendra Varma Pallavan surpassed even Kalki's portrayal; which was also true of the monuments of Mallai, the temples of Kanchi and paintings of Ajantha. Mahendra Varma's worthy successors had wrought wonders, lost to history and the collective consciousness of the Indian public, but these were revived by an amazing set of English orientalists, passionate, scholarly, systematic and deserving of our gratitude; they had help from some French and Indian compatriots - all these were brought to light by Prof Swaminathan's marvellous manuscript on Mallai. And after that three day trip, I just had to read about Ajantha, which I found out he had also written a manuscript about. My first two attempts at provoking the site visit failed, but fortunately Mr Narayanaswamy was able to succeed. And in honour of Sivakaamiyin Sabatham, whose first section is called Paranjothi Yathirai......well you know the rest.

In January 2010, as the first Site Seminar of the Tamil Heritage group, under the guidance of Prof Swaminathan, we spent three days in Mamallapuram. The following text is the email I sent in September 2009 out as an introduction to the preparatory meetings we held before our site seminar.


Atyantakaama Ashrama Vijaya
Maamallapuram is today considered a tourist spot, a quick getaway, a sleepy hamlet, and a seaside resort. In most people’s minds, its chief attraction is its proximity to Madras, and its uniqueness seems to be that it has temples without priests and sculptures without roofs.

There’s an ocean of ignorance between the history and significance of Maamallapuram and its perception in the public mind. In reality, it was a laboratory of art and sculpture, an open air museum patronized by a dynasty of dynamic monarchs, a granite canvas for grantha calligraphy, a field of stone planted with immortal monuments by artists with fertile imaginations. It stands unique in its diversity of architecture. In grace it has sometimes been equalled, but rarely surpassed. It was the epicentre of a cultural earthquake, whose aftershocks reverberated for a thousand years. Its impact spread across the land, and even crossed the oceans. It was a thriving commercial port, Kadal Mallai, for the first empire of Tamilakam, the Pallavan. But as subtle as the sculptures, are the unsolved mysteries it poses; about authorship, inspiration, incompleteness, paucity of literary references, even its influences and a later loss of imagination.

To have something so magnificent nearby and not revel in it, and share in its marvels, is akin to visiting a restaurant to merely smell the food. Today there are people across a wide spectrum of professions and backgrounds, with a thirsting curiosity to imbibe deeply of the spirit and the saga of Mallai, so that they may in turn spread such awareness among others, so history and art appreciation may come alive once more, a thousand years after they were created.

To this purpose, we propose a seminar at Mallai. This shall comprise an introduction to the history, guided visits, lectures by experts, artistic performances, sessions for feedback and free exchange of opinions. Thematically, there are four types of monuments at Mallai, the only such place in the world. These are cave temples, monoliths, structural temples and open bas-reliefs. They are scattered geographically, and there is a historical evolution with marked stylistic variations.

A proper, patient study would take at least three days, one day each for the caves, the monoliths and the structural temples (reliefs are a feature of all of the above).

As preparation for the seminar, the participants must have at least a brief knowledge of :
This is a link to Prof Swaminathan's Powerpoint on Mallai.

PS: 1. Mr KRA Narasiah believes Mallai could not have been a port, because it is not a river mouth and it is too rocky for ships.
2. We only had lectures on five of the above topics.
3. Ajanta/Ellora was next, I will post my essay on that next.
4. Please remember, all this happened in 2009/2010. Our current plan is to visit Gujarat for a site seminar in January 2014
Posted by VarahaMihira Gopu at 10:22 No comments:

On Teachers day, I was honored to give a lecture on Indian Astronomy & Mathematics to the teachers of Hindu senior secondary school, Indira Nagar, Madras, almost one month after the same to their 9th class students. The teachers were as interested and as curious as the students. They all filled the back rows of chairs, leaving the front rows empty until the Principal asked them to move forward, they broke into excited chatter occasionally, some were excited, others sedate; in fact they behaved exactly like their students did a month back (or daily, depending on your perspective!) But the teachers showed more patience. I enjoyed it. Thanks to Tara Prasad, sanskrit teacher at the school and their principal, Ms Padmini, who was very supportive.

A special privilege was having three of my gurus in attendance - Prof Swaminathan, "Nagupoliyan" Balasubramanian and Mr KRA Narasiah- along with Siva Thiagarajan, Numismatic expert & educationalist.

Guano, while no saint, performs many miracles - Alexander von Humboldt

Self-sufficiency is just another word for poverty - Matt Ridley

Understand what a miracle a flower is - Gautama Buddha

The human race is the only one that gets more prosperous, as it grows more populous - Matt Ridley

When one’s calculations disagree with planetary positions, one must revise calculations, since planet wont adjust their paths & speeds to suit your calculations - Parameshvara