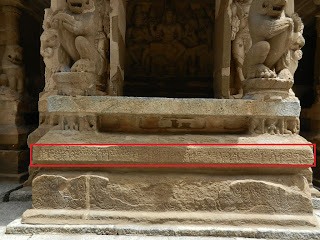 How does life on land differ from life in the oceans? Answer: Dramatically!!

How do plants differ from animals and micro organisms, by the number and mass of species? Even more dramatically! Incredible, in fact.

This is one of the most bizarre graphs I have seen, from a book "Evolution of the Biosphere", by MM Kamshilov, translated from Russian to English by Minna Brodskaya. Mir Publishers, Moscow, 1972.

Post script: This is my first HTML hack on my blog, to include the table.
Posted by VarahaMihira Gopu at 07:45 4 comments:

Around 2009, I complained to several people, “There are no good books on (or by) Avvaiyaar. Even Aathichchoodi is not available in the Madras book fair for the last several years.” A friend, scholar, connoisseur, walking library and teacher, Mr S Kannan, gave me this handwritten note the next week! With his permission, and my translations of his English paragraphs to Tamil and vice versa, I submit this. He’s a retired employee of Bank of Baroda, well known in Carnatic music circles, as the man who created a book listing the first lines of several thousand songs and their ragas.

1.        This was the Avvaiyaar who said, “Nallambar, your country has beautiful Tamil.”
2.        There are several stories about her; isolated poems; sweet stanzas; poems blown into popular legends. Ancient historical legends were superimposed on her.

Her works include KonRaivEnthan, Aaththiccoodi, mooturai, nalvazhi. She lived in the time of AkaLangan (Vikrama Chozha) and his successors.
Many wrong, mischievous, mistaken, dismissable accounts are there associating her with great poets, personalities, or even gods/goddesses. Leaving them all aside, here is a poetess, who dabbled in interesting, humorous, worldly-wise, sweet, simple, elegant and scholarly pieces. Her works were all didactic – moralistic.

She has written two books – 1. JnaanakkuRaL 2. Vinaayakar agaval. The latter is a widely known prayer song, ritually sung everyday in some Saiva families for generations. The former is dharma literature, also called ‘OwvaikkuRaL.’ It has 310 stanzas in 31 chapters.

A lady who had an independent life (not that of a housewife), this Owvaiyaar emphasized freedom of the soul in her poetry. To her is attributed the famous line: “Two lovers, united in thinking and supporting each other – that is bliss.” The bhakti movement’s impact on her is discernible.

Generally, all Owvaiyaars were nomadic bards, restless with wanderlust, constantly moving from town to town, village to village, kingdom to kingdom. Perhaps because, we don’t know the original names of any of them; but only know them by the collective epithet “Owvaiyaar.”

Loved and respected by the people, there are several legends and myths about these Avvaiyaars, all attributed to one women. Mostly these stories are imaginary.

Most historical temples in Kanchipuram were either built or rebuilt in Chola (9th-13th) Pandya (13th-14th century) or Vijayanagar / Nayaka (14th-18th century) times, but some Pallava era monuments (8th-9th century), with very little modification from those times, were discovered by Robert Sewell and others and recorded in Alexander Rea's book "Pallava Architecture." I have visited some before, but a while back I visited Kanchi with Arvind Venkatraman (his excellent collection of photos here) and saw the other temples I missed like Piravaatheesvarar, Airavatesvarar, Muktesvarar and the upper levels of Vaikunta Perumal temple). I wondered where the Tripurantakesvarar mentioned in Rea's book was - "between Kacchapesvara and the great Shiva temple", he says, the latter implying Ekaamresvarar. On Monday August 5, I wandered from Kaccapesvara towards Ekamresvara, in the side streets, and stumbled upon the Amaresvara temple, whose sketch by Rea and my photo are below. I am pretty sure this is the one - the architecture of the main temple is similar in every detail, including Nandi Mantapama & Bali peetam in the lowest photograph, though the sculptures on the walls have been lost. The temple gates were closed, so I couldn't go in and take photos of the back walls and panels, but I am sure that they are gone too, and only these modern depictions remain. The ASI seems unaware of this temple or don't want to mess with it as it is in active worship, and they have their plates full with the existing temples. Let us hope the main facade at least will not suffer damage - it's a beautiful structure. Sorry I couldn't take a better picture, but I was shooting through a grilled gate and a nearby resident started an interrogation session on my ancestry, qualifications, and future prospects - anyway I was keen to decipher inscriptions in Kailasanatha as my previous blogs note.

Postscript: Any courageous inspired tenacious brilliant explorer can discover a lost temple in a jungle, a ravine, or under the ocean. But to discover one in the middle of a city in everybody's sight - that takes an Ajivika Wallacian :-)

On Monday, August 5th, I read my first Pallava grantha inscription in Kanchi Kailasanatha temple - "Shri Raja Simha Pallavesvara" the name of the deity, which includes the name of the temple's royal founder himself! Under the large Dakshinamurthy panel.

"Shankarashchira" (Shankara's head) and "salila" (sand) are the other two Sanskrit words I deciphered shortly afterwards. Apt, and a bit spooky, since, the temple is built with sandstone. It felt like Kailasanatha was playing divine calligraphic joke on me. :-)

Here is a better picture of the name of the temple and the location of this inscription on the wall of the shrine below the Dakshinamurthy panel. 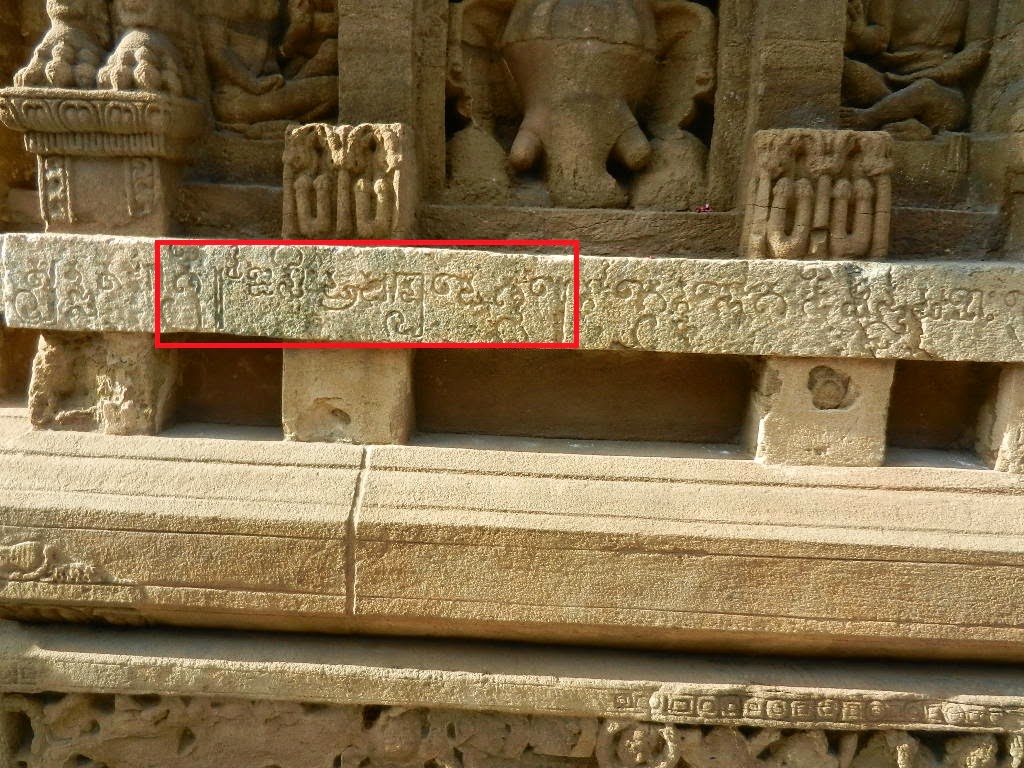 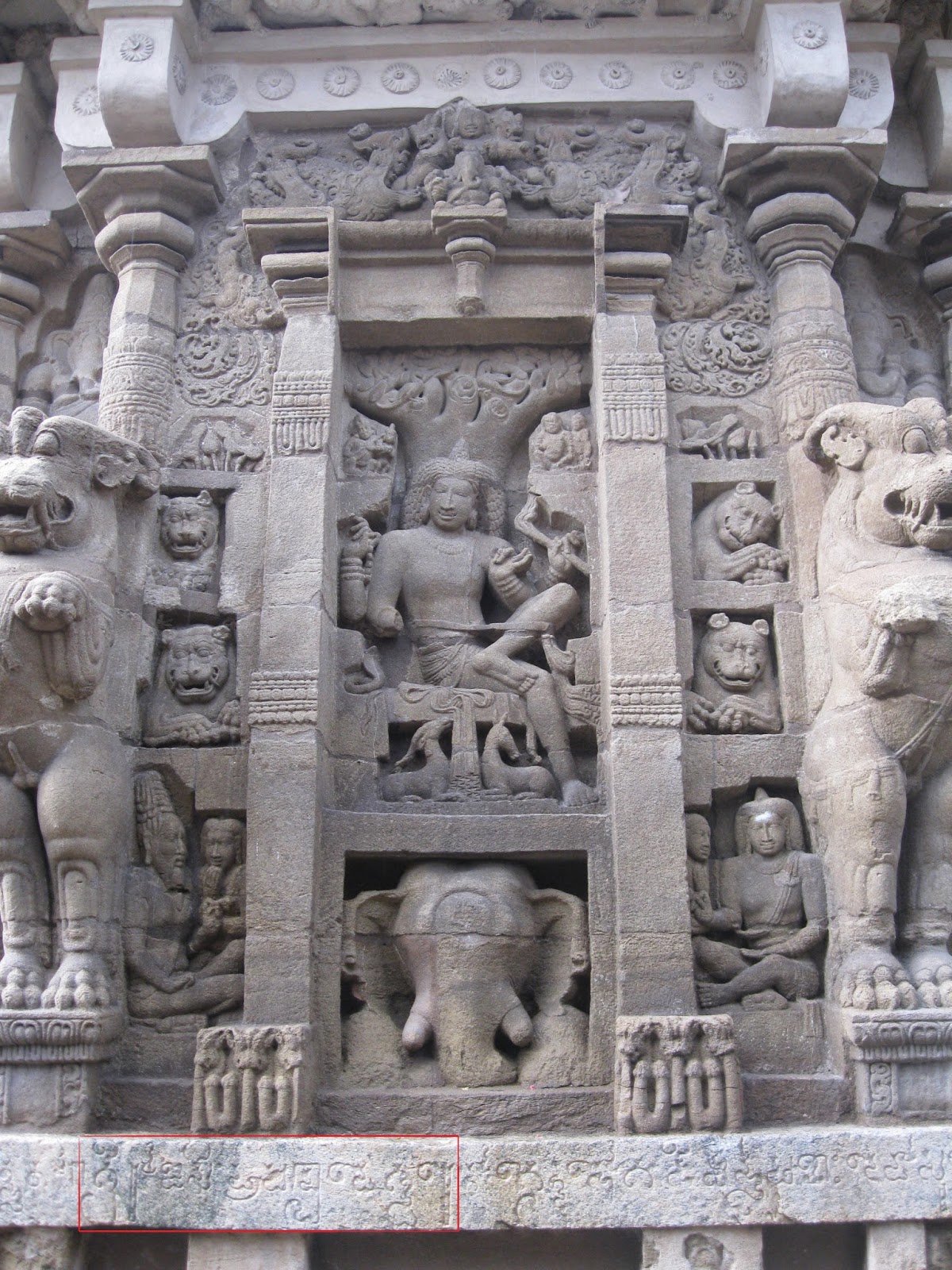 The Kailasanatha temple in Kanchipuram, built by RajaSimha Pallava has several inscriptions in the Sanskrit language. There are several sub-shrines in the temple, and beneath each sub-shrine, the nearly 300 titles of RajaSimha are etched four times. The temple is carved in sandstone, but there's a granite slab in the middle of each subshrine. 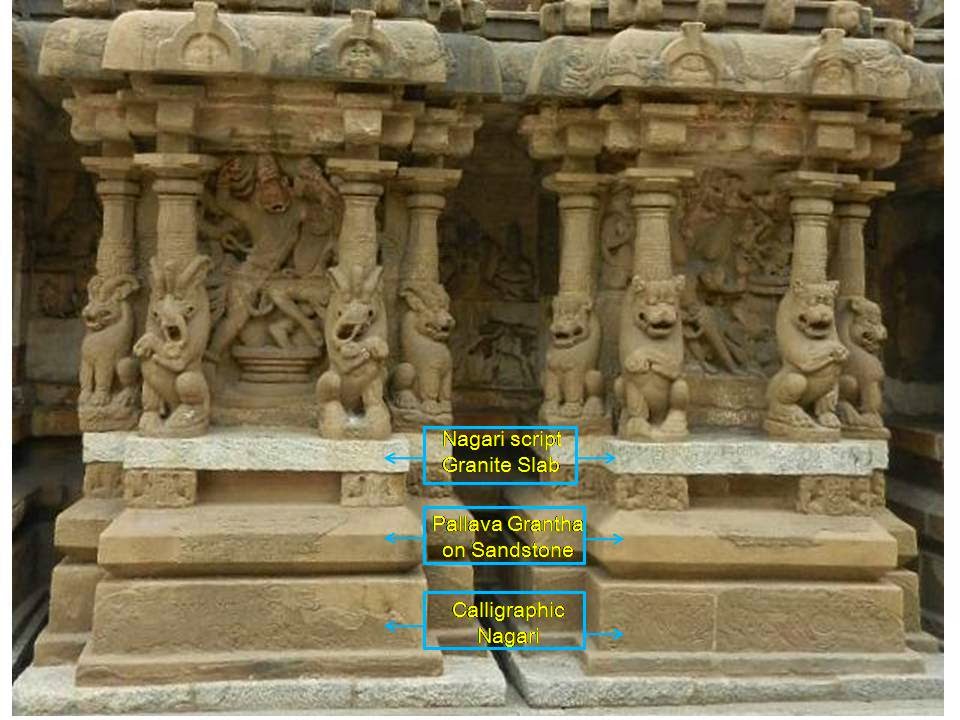 On this granite slab, the king's title is inscribed in DevaNagri, which was used to write Sanskrit in North India and is used to write Hindi and Sanskrit now. Just below it, on the sandstone, the king's titles are inscribed in Pallava Grantha, which was used to write Sanskrit in South India from around the 6th century. This is believed to be the mother script for Telugu, Kannada, Malayalam and Southeast Asian scripts. On the lowest layer, are inscriptions in calligraphic grantha nagari.

Inspired by this, I requested Bhushavali to decorate  a T-shirt with this calligraphy and some simpler grantha inscriptions from the Dharmaraja Ratha in Mamallapuram. Here is her design – she used the same textile painting she taught the children at Summer camp this year. You can see me wearing the T shirt, at Vinobha hall in Thakkar Bapa Vidyalaya.

Correction: I had earlier captioned the calligraphic inscription in the sculpture and on my T-shirt as "Sri Kankalahasta:" After going through Gift Siromoney's translations provided by Vijay Kumar, I now believe it is "Sri Kalankarahita:" (which means Immaculate or Spotless).

Other essays on Sanskrit in my blog
Posted by VarahaMihira Gopu at 08:55 2 comments: