I will deliver a talk titled "Varahamihira's Eclipse Proof" at the Indian Science Festival, Hyderabad, at 11am this Saturday 21st January 2023. At Nucleus Arena.

Entry is free to public. Click here for Registration, schedule

I will also conduct a workshop on Aryabhata's square/cube roots algorithms at 12pm on Sunday January 22. Limited seats.

In 2020, Badri Seshadri and I presented talks on Indian Mathematics at ISF Pune.

The Men who knew Zero to Infinity 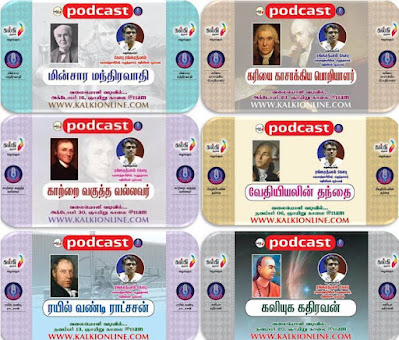 The men who knew Zero to infinity January 2020

Devan Memorial Lecture: The Importance of Being Earnest  September 8, 2017

Saveetha College : Travels in Thoughts and Words (starts @ 6:52) - An introduction to my favorite books

Gopu's lecture - How to See a Temple

Sittannavasal - An Overview and a Proposal October 2019

Egmore Museum: A quick look at Amaravati Sculpture 2015 May

University of Kerala Pallava Art as a fountainhead of Syncretism 2021

Index of Indices  - my blog essays grouped by subject

Links to my lecture videos are on a sidebar in my blog, but these are only visible if you see the webpage on a browser in a PC or laptop, or click web version in your smart phone. People share or stumble upon my talks in youtube, but rarely see this sidebar. So I created this index of videos.

James Watt’s steam engine was a big improvement over the Newcomen steam engine. The timing of the James Watt’s improvements were impeccable, coming along when the Cotton Revolution was well under way. Improvements in metallurgy were critical. Watt’s business partnership was with Boulton excellent.

The invention of crank shafts and sun-and-planet gears, which converted the linear motion of the steam driven pistons into rotary motions which powered wheels, textile looms, and grain mills, made the steam engine the prime mover of the Industrial Revolution.

But the next stage of evolution, the emergence of the locomotive steam engine, took nearly fifty years after Watt’s improvements and innovations. James Watt himself planned a road based locomotive, and his assistant Murdoch designed a model, but they never built one. Three people played key roles in the emergence of the locomotive steam engine and the railways: Richard Trevithick; George Stephenson and Robert Stephenson.

Richard Trevithick grew up in Cornwall, full of coal mines, the district of England where most of James Watt engines were installed in the first few years. Unlike James Watt, he had no fear of high pressure steam.

He conceived the boldest, most imaginative changes to the steam engine. But he had to wait until 1800 when James Watt’s patent, extended by Parliament, expired. Boulton and Watt’s phenomenal success, fame, and global recognition, especially among the aristocrats of England, worked against Trevithick, a commoner from lower classes. But his advantage was that neither science nor technology respects reputations; only society does.

First Trevithick realized that the condenser itself was not necessary. This alone was quite revolutionary. The right amount of steam pressure is sufficient to run the engine, if it was higher than atmospheric pressure. In fact, he was working for the DingDong mine, and trying to help them avoid paying royalties to Boulton & Watt – when he had this epiphany. He built a engine running at 30 psi, three times the pressure in Watt’s engines. The higher pressure meant a smaller, lighter engine, with a power-to-weight ratio sufficient to power its own locomotion.

Second, he put the furnace inside the boiler. Just the sheer audacity of this design is mind-boggling – but taken for granted once it was accomplished. Tubes ran inside the boiler, heating all the water around them, rather than just heating a vessel from the bottom, as is still mostly common in cooking. He made the boiler horizontal rather than vertical which suits this model of heating so well. Excess steam was let out with a blast pipe, since the condenser was eliminated. A safety valve was added. 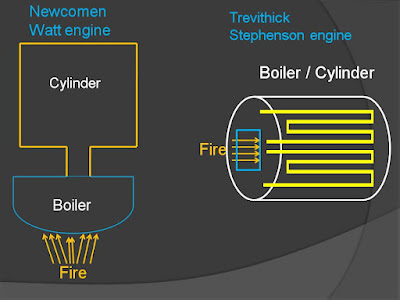 Another major design change was that the piston and its cylinder were tilted, at a 45 degree angle. The tilted operated a set of wheels via a crankshaft. Basically, the whole engine was a boiler fitted on to wheel-based chassis.

These seem to be the most radical alteration in design of any major mechanical device, until the advent of turbines nearly a century later. Several things helped Trevithick : first a much better understanding of heat, steam, flow etc. Second, there were incremental improvements in metallurgy, which allowed for stronger cast iron cylinders which could withstand higher steam pressure without exploding.

Trevithick built a steam locomotive for the road, in 1801, called the Puffing Devil, which featured all these innovations. It had a successful road test, with a few people. But it was hard to steer, fell into a gully, and left unattended, the furnace still boiling water, exploded when it all the water boiled off. He later built another vehicle for the road called London Carriage, but it also had a lever-steering, and no one wanted to buy it.

He patented this high pressure steam engine in 1802. He sold it as a stationary engine, powering a water pump and operated at 145 pounds per square inch (PSI) compared to around 10psi for Watt’s engines. One of these engines exploded, killing four people, and James Watt called for hanging Trevithick for killing them. But it was shown that it was operator error, not a design problem. Trevithick added a second safety valve, which would open and quench the furnace with water, shutting it down, if the pressure exceeded danger levels.

In 1802,  Trevithick also built a steam locomotive that ran on rails, called the Penny Darren. It successfully carried cargo and passenger wagons for 15 km, at a slow speed of about 4kmph. Historians consider this the first steam locomotive train. But the engine was too heavy for the cast iron rails, which broke.

Trevithick spent the rest of his life building stationary engines, and several other experimental devices, but none of them brought him the commercial success that Newcomen and Watt got from their engines. He spent some years building engines for mining in South America, but returned to England when war broke out. He died almost a pauper, and was only recognized for his contributions and honored after his death.

Where Trevithick failed, George Stephenson, ten years his junior, a coal worker and self-taught mechanical engineer, succeeded, barely a few years later.  Illiterate until the age of 18, he attended night school to learn to read and write, to add to all his practical knowledge. Wagons running on wooden and cast-iron rails, usually pulled by horses, had become popular over several years. Inspired by Trevithick several others built high pressure steam locomotive, to replace horses, including Stephenson, in 1814. He built several locomotives, all of which eventually damaged the rails by their weight. Stephenson came up with some innovations like steam springs, and using more wheels, to distribute weight. In the meanwhile, iron smiths had developed wrought iron, which had lower carbon content than cast iron, was tougher and more malleable.

In 1821, Stephenson was hired to build the 40km Stockton-Darlington railway line, to carry horse drawn wagons. He convinced the director, Edward Pease, to use a steam locomotive instead, running on wrought iron rails. The Stephenson engine was a slightly improved version of the Trevithick engine, featuring horizontal boiler, internal furnace, water tubes, tilted pistons and blast tube.

His son Robert Stephenson, built an engine called Locomotion, which hauled a coal wagons for 14 km in 2 hours. The successful run inspired another the commissioning of a railway line between the much larger industrial city of Manchester, hub of the cotton industry, and the harbour town of Liverpool, a distance of 97km. The biggest challenge now was building a railway line over varied terrain including marshes and peat bogs, and George Stephenson took on this challenge.

The directors of the LMR railway line arranged a competition among five different locomotive engines, in 1829, one of which “Rocket”,  was built by Robert Stephenson, son of George. It was the only one that completed the run, so it won. It became the model for all future railway locomotive engines. This success, launched an era of building railway lines, carrying both cargo and passengers, first across England, then in several European countries, launching a total revolution in the field of transportation.

The Stephensons found the financial success and fame, that sadly eluded Trevithick whose innovations were the basis of the railway revolution.

Railway lines were built all across Europe, then the USA, and in India in the next few decades. The cost of transporting goods dropped precipitously. The time for travel across land also dramatically reduced from days to hours. In parallel, steam powered boats, then ships, made ocean voyages cheaper, safer and more predictable; and cost of shipping goods across the world also dropped spectacularly. The great benefits in manufacturing, powered by stationary steam engines, now could reach all corners of the world, thanks to locomotive steam engines.

It also had downsides. Vast numbers of artisanal workers, especially weavers in Europe and later India, lost their livelihoods or became poorer, as the couldn’t compete with loom produced textiles. But the number of manufactured goods increased dramatically, making necessities out of luxuries.

The political consequence was Britain’s ascent as an unprecedented global industrial, technological, military, economic and hence political, superpower. The nineteenth century was truly the century of steam power, which continued well into the twentieth century, even decades after the invention of electrical, deisel and oil powered engines, and later turbines.

Essays on Inventors and Discoverers