Theodore Baskaran on Film and Literature at MLS

Theodore Baskaran தியோடோர் பாஸ்கரன், renowned film critic, and author of a history of Tamil cinema, Em Tamizhar Seytha Padam (The Films Made by our Tamils) எம் தமிழர் செய்த படம் lectured on the topic “From Print to Screen : Literature and Tamil Cinema” at the Madras Literary Society, on 21 April, 2018.

The lecture was preceded by the opening of a Tamil Books section, at the MLS, thanks to a generous contribution of Rs.25000/- from Smt Padmapriya and her husband Sri Baskaran (no relation to the speaker). via their foundation Aalayam Kanden Trust. They donated the full receipts of Padmapriya’s book “The Gods of the Holy Koovam”, which was released in Feb 2017 at the MLS. On that occasion, I had the privilege of lecturing on the History of the MLS, based on the then recently rediscovered book by N Ramaswami. Several books have also been donated by various people and patrons. The library is eager to expand both its collection and its membership.


Nivedita Louis, who compered the program, invited me to say a few words about the Tamil section. I said that it was an extraordinary and generous contribution by Padmapriya. I added that such a section was long overdue, given the historical association of the MLS with the Tamil language, its discovery of the Dravidian and Munda families of languages by Francis Whyte Ellis and his collaborators, and the significance of their contributions to several aspects of Tamil society in general.

These are my notes from Theodore Baskaran’s lecture.

He had prepared a PowerPoint presentation in Tamil, but he said that, based on a quick glance at the audience, he felt it best that he speak in English.

Tamil film had a long association with books and notable authors. The film Malai Kallan மலை கள்ளன், starring MGR, was written by Namakkal Kavingar, a famous Tamil poet. Classical Tamil literature like Silappadikaaram சிலப்பதிகாரம் and Kundalakesi குண்டலகேசி had inspired such films as Kannagi கண்ணகி and Manthiri Kumari மந்திரிக்குமாரி, adapted as screenplays by M Karunanidhi. Both MGR எம்.ஜி.ஆர் and Karunanidhi கருணாநிதி later became Chief Minsters of Tamilnadu as did their mentor, CN Annadurai அண்ணாதுரை, a popular playwright, novelist and screenwriter.

But these famous names came later. Anaathai Penn (Orphan Girl) அனாதை பெண், a book by Vai.Mu. Kothainayagi, வை.மு.கோதைநாயகி a path-breaking feminist, freedom fighter and author of the early twentieth century was filmed by Raja Sandow. It was the first Tamil book to be made into a movie. Serialized novels in magazines were popularized by SS Vasan, the founder and head of Gemini Studio. He published stories like the famous Thyaga Bhoomi தியாக பூமி, written by Kalki கல்கி and Thillana Mohanambal தில்லானா மோகனாம்பாள் by Kothamangalam Subbu கொத்தமங்கலம் சுப்பு. Such novels were the source for several of his movies.

Unfortunately, most Tamil films are merely photographed drama, the speaker lamented. Most film directors, even the popular ones, like AP Nagarajan and K Balachandar came from the stage. Cinema has its own grammar, different from print and the stage. Few filmmakers understood this. Also, Tamil country had a very popular era of stage plays before the advent of film, full of songs and dance, and narrations of mythological stories. When the era of silent movies ended, and talkies came along, the first generation of actors were all from the stage, far better at singing than acting. The tradition of songs in the film, often utterly unrelated to the story, is till date a major flaw of Tamil cinema, the speaker said. They only retard the narrative.

The era of mythologicals gave way to social themes during the 1950s, primarily fueled by the politics of the Dravidian movement. This merely replaced innumerable songs with interminable monologues. Even Dravidian film makers who brought on social themes like caste discrimination and social justice, had actors talking like they were on  political podium rather than exploiting the grammar film.

Not many of us know Rajaji ராஜாஜி was an excellent writer in Tamil, Mr Baskaran continued. His novel Thikkarra Parvathi திக்கற்ற பார்வதி was filmed by Singeetham Narasinga Rao. The major flaw in the story is that the protagonist gets addicted by drinking toddy. You can't get addicted to toddy, only arrack. I have drunk toddy, nothing happens, he quipped. Rajaji didn't know the difference because he was not a drinker.
Literary writers also contributed their mite to the screen. Ucchi Veyil (High Noon) உச்சி வெயில் a novel by Indira Parthasarathy இந்திரா பார்த்தசாரதி was turned into a film called மறுபக்கம் which won a National Best Film award, but was totally ignored by Tamil population, because it was not a commercial hit. Tamil audiences and even the film world had a mental division of films as either commercial or art, and the latter label was an omen of commercial failure.

In this dark world of Tamil cinema, there were  a few flashes of lightning like Jayakanthan ஜெயகாந்தன் who filmed two of his own novels. Yarukkaaka Azhuthaan (For whom did he cry) யாருக்காக அழுதான் one of Jayakanthan’s films is one of my favorite films, he said. Nimoy Ghosh, who settled in Madras, and was a contemporary of the legendary Bengali film maker Satyajit Ray, shot this film and used very imaginative lighting.

Great films like Mullum Malarum (The Thorn and the Flower) முள்ளும் மலரும் were made from mediocre novels. This is often true of Hollywood films like Godfather and Psycho. Anuradha Ramanan’s அனுராதா ரமணன் novel Chirai(Prison) சிறை was made into a film – a rare example of a female author’s book, after VaiMuKo.

Sila Nerangalil Sila Manithargal (Some People in Some Moments) சில நேரங்களில் சில மனிதர்கள் was another classic Jayakanthan novel, filmed by a director who showed people talking all the time - it wasn’t very visual. Most authors feel unhappy that directors have misunderstood their novel and made a mess of the movie, but often the authors themselves had a very poor sense of filmmaking. They also indulged in long dialogs and poor pacing.

Alfred Hitchcock said, “Never use words to describe what you can simply show.”A filmmaker should think visually first, but most Tamil filmmakers think verbally. This led to absurd scenes. For example, there are scenes where a character walks into a room and  says things like, “There is nobody here” or “Ah, there is a glass of water.” The audience can see this, why this superfluous dialogue?

A brilliant example of visual filmmaking is from the Hollywood film Gandhi. In a scene, Gandhi washes his face in the river, when he notices a desperately poor woman, washing half her saree. She is so poor she has only one saree and she can only wash one half of it while wearing the other. Not even looking at her, and not wantingto overtly walk over and give her a shawl, Gandhi lets slip his shawl into the river, and it gently floats to the lady. She gratefully grabs it. Without one word being spoken, the filmmaker Richard Attenborough shows the compassion of Gandhi...

Often a film can be inspired by a short story, not a novel. Such was Baskar Shakti’s short story, made into a wonderful film Azhagar Saamiyin Kuthirai (Azhagar Saami’s horse) அழகர் சாமியின் குதிரை.

The Malayalam film Madhilukkal (Walls) மதிலுக்கள் has a scene of the line where the protagonist in the novel, a prisoner, says, “I could smell women, on the other side of the wall”. Because a womens prison was on the other side. Adoor Gopalakrishnan the director, could not show the character smelling the walls. So he introduces a peal of a woman's laughter. This is creative interpretation, and evokes the same emotion the author intended.

Overall, Tamil unfortunately doesn't have a good relationship between literature and film. Several novelists' books have not been made into films.

Cinema is not for entertainment, he concluded.

While I whole heartedly agree with Theodore Baskaran in his criticism of Tamil cinema as being too verbal, photographed drama, and not often visual, I think he is totally off the mark on two issues.

1. Songs – Indian audiences love them. In fact cinema music is the most succesful and popular music industry and genre in India. The bulk of the audience simply doesn’t care that the narrative is broken or retarded, or irrelevant to the film. Often the songs are far more popular than the movies.
2. “Cinema is not for entertainment.” I think what Theodore Baskaran means, is that cinema is a powerful medium that can be used to educate and mould public opinion, improve society etc.  Personally I prefer entertaining cinema to any advice and propaganda.
3. Literature versus Cinema. I think good literature (itself a very subjective estimation, usually by a segment of the population that reads a lot of books, and has an innate sense of superiority) rarely makes for good cinema (another subjective estimation). In contrast, often so called mediocre novels, make for excellent and successful cinema, because they appeal to more than snobs and nabobs. John Grisham and Chetan Bhagat’s novels are the most popular proof. Often the “mediocrity” of one generation is the classic of its succeeding generations.

Books
எம் தமிழர் செய்த படம் (The Films Made by our Tamils)  by Theodore Baskaran
Mu. Ka –A biography of M Karunanidhi  by Ramki. J
Gods of the Holy Koovam by Padmapriya Baskaran

Have you heard of the Ujjain Meridian? It was used for 1500 years, but why is it unknown to Indians, unlike the Greenwich Meridian?
How did Aryabhata Brahmagupta Bhaskara and Varahamihira do mathematics without knowing English or Greek? Was Sanskrit only the language of rituals and literature, or also of mathematics and science? Can you calculate long divisions in very narrow palm leaves?

How did Indians tell time, predict eclipses, make calendars and mark dates for religious festivals like Kumbha Mela or Mahamagham before the mechanical clock was invented in the seventeenth century? And what mathematics or astronomy did the Egyptians Chinese Sumerians Persians and Mayans understand or discover?

Learn the answers to these questions.

Learn the history of Indian mathematics and astronomy and its various texts, including Siddhantas, bhashyas, karanas, and panchangams. Discover Baudhayana’s geometry and Brahmagupta’s algebra. Discover the long history of Indian Astronomy before the telescope, Indian mathematics before Aryabhata, the connections from Brahmagupta to Baghdad to Fibonacci and other surprising and interesting facts that pervade your everyday life even today.
You can send me a Whatsapp message on +91 9841724641 or email to writergopu@gmail.com to register or ask questions on the course
My blogs on this theme 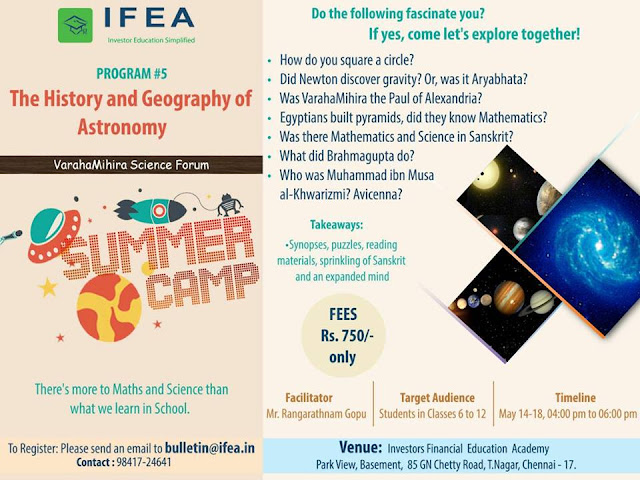