Is Madras the cultural capital of India? Some people seem to think so. Given the film industry of Kodambakkam and Vadapalani, the Tamil publishing industry, the December music season, and recently the Madras week celebrations, besides institutions like the museums, the Government College of Fine Arts, Kalakshetra, it seems a fitting epithet. A sorely missing aspect is popular science programs. Which is ridiculous for a city that boasted of mathematician Ramanujan, and physics Nobelist S Chandrasekhar.

Some of us felt that we need a forum for lectures addressed to the general public. A forum that hosts monthly lectures, where people can meet regularly and develop fellowship and a community. So we have started the Varahamihira Science Forum (this is our Facebook page). The speakers need not be professionals in their field, though we would be delighted to have them lecture. Anyone who can tell a great story, with all the drama and suspense and humour and obstacles and puzzles that science demands and boasts of, is an ideal speaker.

The first lecture will be on Sunday 20 August 2017, from 4pm to 5.30pm. I will deliver a lecture on Antoine Lavoisier and the Origin of Modern Chemisty. The venue is Wandering Artist, 51, 6th Main Road, RA Puram, Chennai. There will be an entrance fee of Rs.100/- per person. This is merely to cover costs like hall rent. We intend to run this forum as a non-profit organization. There is not even an organization, just a bunch of friends volunteering to get something going, along the lines of the Tamil Heritage Trust.

We hope we can have a series of monthly lectures, and that it inspires similar fora across the city and the state. We also hope we can form a community and launch other activities. 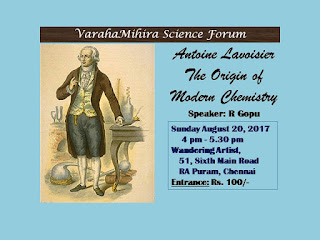 A Sanskrit anthem for Mathematics

In the ninth century, most of today’s Karnataka was ruled by a king of the Rashtrakuta dynasty called Amogavarsha Nrpatunga. One of his inscriptions says that his kingdom extended from the Godavari to the Kaveri, so his territory was not confined to modern Karnataka.This king was also a very special scholar – he composed the oldest surviving great literature in the Kannada language, Kavirajamarga.
In his court lived a great mathematician, Mahavira, who composed a book titled GanitaSaraSangraha. This is as remarkable as Kavirajamarga, because this is the oldest book in Sanskrit,exclusively dealing with mathematics. Hundreds of books  were composed in previous centuries in Sanskrit, including the famous books of Apastambha, Baudhayana, Aryabhata, VarahaMihira and Brahmagupta. But those books were either sulba sutras or jyotisha sutras, and mathmatics was one of the components of those books.
GanitaSaaraSangraha is the first book where mathematics is the primary subject. Several later astronomers like Madhava, Parameshvara, Bhaskara and Nilakanta Somayyaji wrote books on Astronomy, which had chapters on Mathematics, so the older practice did not fade out.

Prof Rangacharya of Presidency College, Madras translated GanitaSaraSangraha into English in 1912. The book was translated first into Telugu by Pavuluri Mallana, in the eleventh century and most recently in 2000, to Kannada by Prof Padmavathamma, of the University of Mysore. To my knowledge, there is no Tamil translation, except perhaps my own translation of a mere three stanzas.

Mahavira, was a Jain. The first stanza of the GanitaSaraSangraha has the phrase namastasmai jInendrAya mahAvirAya नमस्तसमै जिनेन्द्राय महावीराय (Salutations to Jinendra Mahavira), a reference to the last Jain tirthankara, Vardhamana Mahavira. Interestingly, in their first slokas the Hindu astronomers Aryabhata salutes Brahma, Brahmagupta salutes Siva, and Nilakanta Somayyaji salutes Vishnu. An interesting  comparison may also be made to the famous Meguti inscription of Chalukya king Pulikesi in Aihole, which begins with a similar salutation to Jinendra (Jayati Bhagavaan JinendraH जयति भगवान् जिनेन्द्रः)

This is the other remarkable aspect, because the book is in Sanskrit, not Prakrit. Popular belief is that most works by Jains and Buddhists were written in Prakrits (Jain works in Ardha Magadhi, and Buddhist works in Pali). While this is true of several Jain and Buddhist compositions of the first few hundred years, not just for philosophy or religion, but also for sciences, later Buddhists and Jains wrote in Sanskrit, which became the lingua franca not just for people who followed the Vedic religion, but also for the sciences and the arts.
This is an extensive topic, which is not well-known to learned Indians, and I wont discuss it here. But this is very similar to how Latin was used in Europe, after the fifteenth century, not just as the language of the Christian clergy, but also of science and arts. Hence, Linnaeus developed Latin nomenclature for naming plants and animals by genus-species, Newton wrote his book book on physics Principia Mathematica de Naturalis in Latin, chemists from Lavoisier onwards, used Latin words to name most of the elements. And since the laws of Europe use Roman law to guide them, which thence guide the Constitution and laws of former European colonies like India, Pakistan, USA, Australia, most of Africa and the Americas, Latin is the primary language of global law, except in Islamic countries and China.

But in this blog, I wont discuss the new mathematical concepts expounded by Mahavira, but merely quote three stanzas of his poem, which I believe should be declared the Anthem of Mathematics, and included in every mathematics school text book, not just in India, but in every culture broadminded enough to enjoy and agree with this poem. Here is the Sanskrit source and my English translation. My Tamil translation is here.

In worldly life, in Vedic learning, in religious practice,
In business, in everything, Mathematics is useful.

In romance, economics, in music dance and drama,
In cooking, medicine and in architecture,

In prosody, poetry, logic and grammar,
In all the arts, Mathematics reigns supreme.

If you liked this essay, you may enjoy reading these related blogs:

0. My Essays on Astronomy
Posted by VarahaMihira Gopu at 15:04 2 comments: