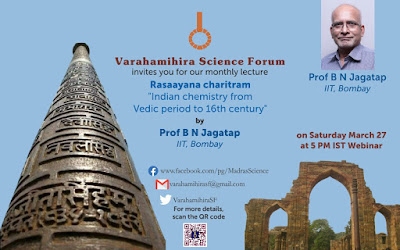 I suggested that we should consider science too as part of our heritage, and we should have a lecture on a science topic like astronomy. Prof Swaminathan our founder, enthusiastically agreed and "volunteered" me to speak on the subject. It has been a wonderful voyage of discovery. The sheer volume of books, scholarship, the long tradition of Indian astronomy (older than the Ramayana and Mahabharata) were an absolute revelation. The sheer ignorance among the scientific public and what must be considered malignant suppression of this history have been heartbreaking. But also eye-opening.

In December 2019, I attended a series of lectures organized by KV Sarma foundation, which included a lecture Prof BN Jagtap on Indian Chemistry.

I thought he would talk on the Delhi iron pillar, wootz steel, and the everlasting paints of Ajanta, and the dyes of Indian textiles. Modern chemistry began only with Antoine Lavoisier and his discoveries in the late 18th century. Most of Indian chemistry I assumed, was empirical, the discoveries of practical experimenters and professionals. But Prof Jagatap showed that Indian chemistry has as glorious and rich and awesome a history and heritage as astronomy and several of our arts. And he says, he too had a voyage of discovery in the field that is only over a decade old! He himself quote Acharya Prafaull Chandra Ray for extensive research on this subject and publications in English for a society that has almost totally given up Sanskrit as a language of science.

Our great fortune is that he has agreed to speak at the Varahamihira Science Forum. He will deliver a lecture this Saturday 27 March 2021 at 5pm.

I hope many of you can listen in, watch and have your mind blown away.

Dr C Rangarajan former RBI governor, spoke on "Economic reforms" at a program organized on December 2, 2016, by the Triplicane Cultural Academy and the Kasturi Srinivasan Library. The venue was the second floor auditorium at the CP Ramaswami Art center, in Eldams Road, Alwarpet. 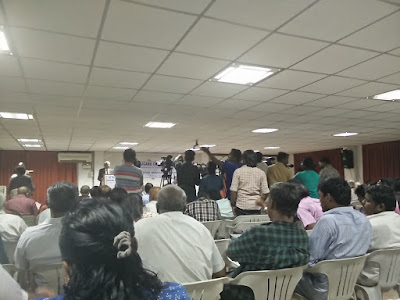 In India, almost every major scheme, plan, reform, program,building, brick, nail or board-pin introduced or implemented by the central government is attributed to the Prime Minister. The one exception is the 1991 economic reforms, which are credited to the then Finance minister, Manmohan Singh, rather than the Prime Minister of that time, Narasimha Rao.

These are my notes from that lecture. Since I am no professional journalist, the reader will feel a certain level of discontinuity in the narrative; the fault is mine, obviously, not the speaker’s. I have highlighted some of his salient points, by marking them in bold font. I have added some phrases in parenthesis to clarify what I think the speaker meant.

In 1991, India suffered a terrible crisis and balance of payments situation. The extant model was in deep trouble. In the 1960s the economic consensus was that there was a  market failure - the market failed to deliver certain services. (Nationalization of banks, industries, vast swathes of the industry and the economy followed, under Prime Minister Indira Gandhi and others, until the 1980s.) This led to diversion of national income, especially into rent taking activities because of socialist regulations.

There can be both market and government failure.

The 1991 crisis was compounded by Iraq war and the fact that current account deficit could not be bridged. Our foreign exchange reserves dropped to three weeks of imports. Totally traumatic period, difficult to manage on a day to day basis. The transfer of gold was decided by Chandrasekar government but the idea came from Reserve Bank of India. Today (in 2016) we get $500M in a couple of days, but (in 1991) we pledged forty tons of gold... It was in very different forms including Victorian coins.

The first break with past was dismantling controls (in several sectors of industry). Second was changing role of the state. Reduced the role of state as marketable goods and services and increasing role as regulator and providing public goods and services. Third was integrating Indian economy into the world economy.

What was the role of Narasimha Rao? Ardent advocate? Did reforms start in 1991 or 1980? Thirdly, what changed the mindsets of politicians who had been part of the controlled regime? Fourth would anyone have done what Rao did?

(1)Economic policy making is not merely the role of economists. Political cover provided by Rao was vital. Rao as Industries Minister decontrolled the economy and announced it on the morning of the budget. Rao couched the reforms in language which appealed to the old guard of the Congress party. I wrote the Eighth five year plan and Rao as pm and chairman of planning commission approved it.

(3) The enormity of crisis made the change possible, and while IMF had a philosophy and played a role, the decision was ours. Upto 1990 all interest rates on deposits or loans were fixed by RBI. Malhotra allowed banks to set interest rates upto 180 days but there was no support and so we had to withdraw it after a month.

(4) Manmohan role was primary. He was part of the South commission which held on to the old ideas even until 1990. But he realized the magnitude of the problem and changed his mind.

We introduced tax reduction which would pay off only several years down the line. (This was partly inspired by the tax reductions in 1980 USA under Reagan and UK under Thatcher, which led to both their economies booming. But the failure of the USSR economically and politically was the immediate trigger).

Higher growth rate in national income produced much better performance in social development. But it is still much less impressive than in economic growth. Which is why Amartya Sen called it "uncertain development ".

Growth impacts social development in two ways. First, the rising tide effect. (A rising tide lifts all boats – that is the population as a whole benefits, not just some sectors of the economy). Second, a pattern of growth. South Korea grew at 7-8% for over three decades. If agriculture improves faster it would help rural India improve.

Domestic private investment is not picking up.

Let me move on to future reforms. One important one is improving efficiency. Another is the introduction of GST (Goods and Services Act).

There are still some industries like sugar and molasses under pre 1991 model. This is subsiding alcohol. Agriculture and its marketing needs reform. APMC Act needs more reform. Farmer cannot sell his products directly. If India grows at 8-9% until 2030, then per capita income will increase to $8000 and only then will India be a middle income country.

Reforms have gained wide acceptance. (By this he meant the 1991 reforms – no major political party wants to go back to the pre 1991 era).

Neither reforms nor growth are ends. Their benefits must go to all.

My comments: This lecture was delivered in 2016. GST was implemented in 2017. The APMC reforms was passed last year(2020), which led to protests for its repeal by mostly farmers from Punjab and Haryana, later supported by some opposition parties. Labour laws have not been substantially reformed. The corona lockdown has perhaps reversed or halted the rate of reduction of poverty. But it has also launched huge gains in productivity, made organizations consider massive reductions in  travel and physical infrastructure. I wonder if these cost reductions will impact positively on the economy and on the individual.

There does seem to be the spirit of ferocious entrepreneurship in urban centres. The courts, the bureaucracy and the media seem completely dead set against these. I hope I am wrong.