A few months back, I gave a lecture at Varahamihira Science Forum, which explained how James Watt invented the steam engine. I prepared this lecture, for a course I teach on Inventions and Discoveries, at Saveetha College.

Andrew Carnegie’s biography of James Watt was a major source for learning about James Watt, his childhood and education, his technical training, experiments, struggles, failures, friends, marriages, religious and social beliefs, the economic and legal environment of England, partnerships (most importantly with Matthew Boulton), his success, his continued research and development, other inventions, employees, customers, his scientific discovery, his obstinacy and resistance to improving the steam engine.

An absolutely fascinating story. I am surprised that I had never even heard of the book, before I stumbled upon it. It was out of print then, but available online in Kindle. Many aspects of his life, and the engine he invented, were quite surprising. My lecture seemed to have no effect at all on the few listeners, so perhaps my surprise is unwarranted.

At one stage in his life, he struggled for lack of money. His partner John Roebuck’s business failed, so Watt had no money to continue experiments to make the steam engine work well. Fortunately, he met Mathew Boulton, an entreprising businessman, very creative in organization and sales. Boulton and Watt formed an enduring friendship and business partnership that have rarely been surpassed in history.

Roebuck and Watt had signed an agreement. As per this agreement, Roebuck invested a thousand pounds ( a huge amount in the 1760s) funding Watt’s investigations into the steam engine. He was confident Watt would develop a better engine than the Newcomen engine that was in use among miners. When Watt succeeded, the idea was that Watt would get one-third share of the profits and Roebuck two-thirds as investor. But Roebuck’s main business failed, he was in debt, and Watt’s research money dried up. Boulton stepped in, paid off Roebuck’s debts, plus the thousand pounds for his the steam engine investment and thus replaced Roebuck as Watt’s business partner.

Recently, the British government, which only printed the faces of the ruling king or queen on its currency, the pound, until recently, issued a fifty pound currency note, featuring Watt and Boulton together. 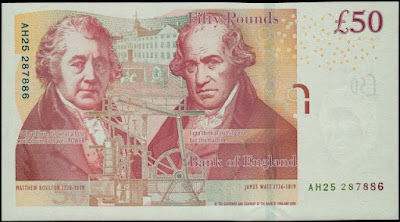 Boulton owned a “manufactory” (what we call a factory today). His employees, artisans, manufactured “toys” – but the word meant something very different in the 18th century. Toys included buttons, buckles, cups, jars, candlesticks, copper and silver plates – what we find in every fancy goods store in any street in India. Britain was getting wealthier and developing a middle class, and they bought such new fancy things to decorate their houses.

But Boulton did not sell only to the new middle class. His famous customers were wealthy and some were aristocrats. His prestige really rocketed when princes of the English royal family became his customers. Princes Edward and George (who later became king) bought swords from Boulton’s manufactory. After that other royalty also became his customers. His best customer was Catherine the Great, of Russia. Yes, that very same Catherine who later became Empress or Czarina. The empress not only visited Boulton’s manufactory, she also stayed as his house guest. And that is when Boulton must have told her about his brilliant inventor friend who was experimenting with a steam engine.

Catherine was so impressed with Watt, she offered him five thousand pounds to come and settle in Russia, and continue his research there. James Watt must have been sorely tempted. Boulton was aghast! He pleaded with Watt not to accept the Queen’s offer, and thanks to his friendship, Watt agreed to stay back. Watt’s first wife had died a few years earlier, and his attempts to marry another lady (somewhat wealthy) were stymied by her brother, until the more respectable Boulton wrote a recommendation letter to the lady’s father. One suspects that this played a big role in persuading Watt to stay.

One might wonder if England’s most famous inventor would actually have left England for Tsarist Russia. It would seem odd today, when England freely allows all the business magnates of the world to buy homes in their country. But much before Watt, Swiss mathematician Leonard Euler had gone to stay and research in St Petersburg, Russia. In fact, he was following in the footsteps of the Bernoulli brothers. Euler stayed for a few years in Russia before accepting Frederick of Prussia’s invitation to move to Germany, but Catherine the Great invited him back to Russia and back he went. So, no surprise that Catherine invited James Watt, also.

The discoveries of Euler in mathematics were not particularly useful to Russia. It simply gave Russia an intellectual prestige, that it could attract exceptional talent, on par with the more scientifically advanced Western European nations. But if James Watt had accepted Catherine’s offer, Russia would have benefited from an early lead in the steam engine, and perhaps even in the Industrial Revolution.

Similarly, Thomas Edison almost migrated to Brazil, and was about to board a ship, before a gentleman he met advised him to try his fortune in New York, instead. But that is another story.

Essays about Inventors and Discoverers