S Kannan labelled a “scholar in hiding” by my friend, V Chandrasekar, reviewed the book Siriyana Sindhiyaadhaan, a Tamil book by Dr S Ramakrishnan, at Gandhi Study Center in Thyagaraya Nagar on Wednesday, May 30, 2018. This book was written in the 1950s.

Here are my notes from his review.

He introduced the author Dr S Ramakrishnan as a Marxist scholar, a Shakespeare scholar and connoisseur of Tamil literature. He spoke English as fluently as we speak Tamil, said Kannan – implying that he was very fluent in English. This book is a literary work; we have not discussed literary books of late in the Gandhi Study Center, he gently chided.

The author is not to be mistaken with the better known S Ramakrishnan, a contemporary Tamil novelist. The subject of the book was an episode from the Ramayana, Vaali Vadham (Killing of Vaali). The death of Vali is a minor episode in Ramayana, and is often considered the black mark in the character of Rama, otherwise considered the epitome of Dharma. The author examines this major deviation, the motivations behind the conduct of the various characters, their argument and their justifications, and how the public should understand these contradictions. This has been a long running debate in Indian society.

Kannan characterised Vali Vadham beautifully as “a dramatic interlude in an epic poem”. The episode can be compared with a Shakespearean play, high strung with emotion and animated disputes and debates, and a tragedy unfolding with foreshadowing and inevitability.

Dr Ramakrishnans skill with words is the remarkable aspect of this book. Quoting a lament of Angadhan, Kannan says, the book tries to discusses the morality or legality of the killing of Vali. When Rama and Lashmana kill Kabandhan, he thanks them for relieving him from the curse and advises them that they cannot defeat the kidnapper of Sita without a strong ally and suggests that Sugreeva is the most suitable ally. Neither Kabandhan nor Sabari recommended Vali, but only Sugreeva. This is significant, notes the author.

Earlier, when Vali fights an asura in a cave and blood oozes out, his ministers advice Sugreeva that most likely Vali is dead, so he must seal the cave and rule the kingdom. A reluctant Sugreeva aregues against their advice, but is then persuaded to heed it. When Vali returns, having killed the asura, he feels betrayed by Sugreeva, and storms back full of vengeance. He pays no heed to Sugreeva’s pleas, explanations, apology or immediate offer of the crown, or his dharmic explanation that he only followed his minister's advice. Sugreeva flees to hide in a hill, fearful for his life. Vali takes back not only the crown but also Sugreeva’s wife Rumaa Taara, for his own. It is this pitiable Sugreeva, hiding in the one place where Vali is powerless because of a rishi’s curse, whom Rama and Lakshmana encounter in their search for the kidnapped Sita.

Rama promises to restore both crown and wife to Sugreeva. Did Rama do so in an emotional outburst, having lost his own wife and feeling a kindred sympathy? Even so, the kingdom was rightfully only Vali’s. How could Rama offer Sugreeva the crown too? Did Rama who renounced his own kingdom at the mere word of his father, feel a greater sting at the injustice meted out to Sugreeva than to his own self?

Worse, Rama offers to kill Vali, not merely defeat him and restore the kingdom. Where was the need to kill Vali? But Sugreeva had realized that only the death of Vali would make Sugreeva safe again or get back his wife. His trusted minister Hanuman employed diplomacy at its finest to explain this to Rama.

The author argues that Kishkinda is an undeveloped (in Kannan’s words) society which is why both Vali and Sugreevan reacted with murderous rage than righteousness (dharmic conduct). By undeveloped, I suspect the author implies that it is less socially evolved than Kosala.

The next contradiction is the different standards that Rama applied for Vali versus Ravana. Why did Rama, who offered several opportunities to Ravana to repair his conduct and restore Sita, and offered not to kill Ravana if he complied, not undertake any such effort with Vali? Why didn't he even send a messenger?

How could he decide on a death sentence for Vali, unilaterally? Was this conduct of Rama any more “evolved”?

Taking Rama at his word, Sugreeva challenges Vali. An enraged Vali is ready to rush out to battle, but is restrained by Tara – unfolding more drama. Foreboding disaster for her husband, Tara, Vali's queen, counsels caution and evaluation. Her spies, she says, have informed her that Sugreeva has acquired a formidable friend called Rama, and Vali’s life may be in danger from this new enemy; and that he has to be cautious in dealing with Sugreeva's latest efforts to rile him.

It is Vali’s response, that elevates him to unparalleled moral heights – and tragically, his downfall.

Defending Rama, Vali tells Tara she is ignorant of the character and nobility of Rama who threw away his kingdom for an oath.

Will Dharma kill itself, retorts Vali, for Rama is the personification of Dharma? Why would such  a great king need to befriend a mere monkey, Sugreeva? And even if he did, would Rama, who makes no distinction between himself and his brothers, kill one brother for the sake of another, rages Vali.

For this slight, I would have killed anyone else but I spare you because you are a woman.

The skill of Kamban, the peerless poet, is in full bloom in these passages, in wordplay, mastery of metaphor and nobility of thought, in dramatic exposition and dripping irony. Kannan recited them with unsuppressed admiration, dancing with diction and pulsing with rhythm.

The irony is that Vali, an ardent admirer of Rama is the one who has misunderstood him, and it is Tara is properly understood him, underlines the author. This scene is eerily similar to one in Shakespeare's play Julius Caesar, where Calpurnia, his wife warns him of a conspiracy to kill him, but he ignores it contemptuously.

Further, Lakshmana who never hesitates to counsel Rama in all other situations, including the Mareecha episode, has not opened his mouth since they entered Kishkinda.

But seeing Vali, Lakshmana praises his countenance and valor. Would not even clouds and oceans treat Vali with respect, on merely beholding him?

But Hanuman’s persuasive skills have been so effective that anything I could say has no effect on you Rama, he continues. Even Yama, the Lord of Death, would fear to approach Vali, but Rama has undertaken to fill Yaman’s (கூற்று) role. When Lakshmana  raises these doubts, and questions Sugreeva’s character, of one who wishes to kill his own brother, Rama retorts, “Why Lakshmana, would every brother be as conscientious and loyal as Bharatha?”

What a cruel swipe at Lakshmana, the outstanding example of brotherly loyalty! Did he shut up Lakshmana with emotion, because he could not do so with righteousness. What shuddering contrast to the words Vali uses to praise Rama.

The author argues that these are vakra vaatham - flawed arguments, made by Rama, because he is following his emotions rather than sense of dharma and judgment.

When Vali and Sugreevan wrestle Rama who has promise to kill Vali, doesn't. He explains that he couldn't distinguish between the brothers. Was this even honest? Could he have failed to recognize Sugreevan with whom he had been moving in close quarters for so many days?

On the second day, when Rama’s arrow pierced him, a surprised Vali retrieved it and then found Rama’s name on it. And he felt ashamed on behalf of the Surya dynasty, as it had slipped in its path of Dharma.

Then he looks at an undisturbed Rama and is astounded that he has not even felt guilt or shame at such an execrable deed (a phrase used by Rajaji while he wrote this episode in his Chakravarthi Tirumagan).

The parallel in Shakespeare is Caesar’s shock, when Brutus whom he held in high regard, also stabbed him.

Why would you have one Dharma in your kingdom and the opposite Dharma in this forest, he asks Rama.

Why have you punished me for the rage caused by the asura Ravana’s crime, who is unconnected to me?

And by what authority? We have no enmity. Even if you felt I commited a crime, I am not a subject of your kingdom, Ayodhya. And even if I were, you have renounced the kingdom and have not even that royal authority to fall back upon.

Chandran the moon has flaws kalankam (களங்கம்) but now Rama by your action you have wrought and colored even Surya with a flaw (kalankam).

Both in morality and in law, the arguments of Vali are valid. And couched in finest Tamil poetry, that pierces us with the injustice and cruelty of the murder, not just a killing.

Here the author reminds readers of the suggestions of Kabandhan and Sabari to seek Sugreeva, not Vali. This is appeal neither to morality or legality, but simply fact that prods us to ponder why.

Traditionally, the events in epics are governed by whimsical Fate – a common theme in the plays and myths of ancient Greece, but also in ancient India. But tragedy in Shakespeare's plays is brought about by the flaws and failures of human nature. And such too is the episode of the murder of Vali, contends Dr Ramakrishnan. The mortal nature of Rama is here to be kept in mind, not his divinity as an avatar of Vishnu. 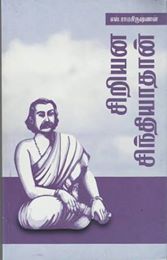 When an era changes, as did the end of Ravana and the great war that caused such havoc, like a flood it destroys minor obstacles in its way. And Vali was only a minor obstacle. This is the essence or thesis of this book, concludes Mr Kannan

Kannan’s narration in Tamil was simply epic. As epic as the source Kamban from whom he quoted. I have captured some snippets in translation. We were all in the presence of something majestic.

The video uploaded by Mr Vijayan can be seen below. Don’t miss it for the marvelous Tamil. This English translation is only for those who cannot savour the original Tamil, of Kamban, Ramakrishnan and Kannan.