On Slavery - Lincoln and Ellenborough 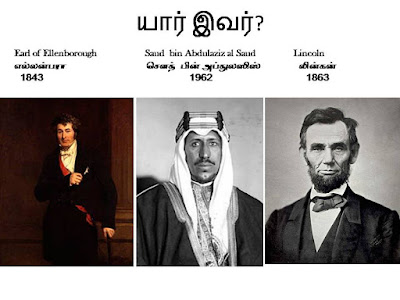 Most of us can recognize only one of the three people in the photo above – Abraham Lincoln, called the Great Emancipator by Americans, because he ended slavery in the United States – and gave freedom to black people (there were no white or Red Indian (Native American) slaves in the US). He was so staunchly against slavery, he launched a Civil War against the Confederacy, the group of Southern States which seceded from the USA, because they wanted to continue slavery. Lincoln was appalled at the brutality and inhumanity of Slavery, and his fellow abolitionists were inspired by the book “Uncle Tom’s Cabin” written by a brave compassionate woman, Harriet Beecher Stowe.

This is a popular narrative. But some questions are rarely asked. Why doesn’t the United States celebrate Independence Day to commemorate the end of slavery, rather than the end of colonialism and British Rule? And why didn’t Lincoln grant women, even white women, the right to vote? And why didn’t Stowe ask for this right (Was it more controversial than slavery? Would it have also led to secession by the Confederacy? Women in the USA got the right to vote in the 1920s. Is that date not more suitably American Independence day?)

But what fascinates me equally is that such questions never arise among Indians about Indian history. Or about the abolition of slavery ANYWHERE else! Colonialism and slavery were both rampant in the nineteenth century. Why do we never hear about any other Emancipator or about any other nation that abolished slavery? How many did so before Lincoln?

Is it only historical if a war is waged?

Hence the photo above. Indian history after 1947, focuses on how Gandhi led the Congress in a freedom struggle against British Rule. The rhetoric often used is that Gandhi and other freedom fighters ended the “Slave mentality” of the Indians. Such fierce rhetoric shines in the poetry of Subramanya Bharathi, the speeches of Bala Gangadhara Tilak, the sermons of Vivekananda, and books and essays innumerable. But the British ended slavery throughout the British Empire in 1833 except in territory held by the East India Company. In 1843, slavery was abolished in the Company’s territory. Hence the Earl of Ellenborough, the Englishman in the picture above. He was Governor General in 1843. Indians know August 15, 1947 – the day British colonialism officially ended. But shouldn’t we celebrate April 7, 1843 when the British Parliament passed The Indian Slavery Act and abolished the terrible practice, not with a war, but with the stroke of a pen? Notice that this was only in the East India Company’s territories – the Presidencies of Madras, Bombay and Bengal. The Mughals still ruled in Delhi and there were other kingdoms throughout India, where slavery continued. There were some Company officers who opposed the abolition of slavery, because among powerful Hindus and Muslims, abolition “would be seen as interference in traditional structures ”!!!

I never read about this in school, in history books, in a newspaper, in magazines, or any other forum. “The British enslaved us” is the popular rhetoric. Not one word in gratitude or even acknowledgement by Gandhi, Nehru, Patel, Rajaji, Vivekananda, Bharati, Tagore or any historian that I know of. One would think there had never been any slavery in India. The Wikipedia web page for the Earl of Ellenborough, in its current form and content, doesn’t mention that the abolition of Slavery. The Wikipedia web page for the Indian Slavery Act mentions neither Ellenborough nor Sir Robert Peel, who was Prime Minister of England when this Act was passed. How much credit do they deserve?

Most countries abolished slavery without a civil war in the 19th century. Most countries fought against colonialism and acquired some sort of freedom – often they were ruled by much worse, more brutal, more incompetent dictators than the European colonists. The end of colonialism usually replaced the earlier white European aristocracy (only some were aristocrats in Europe) with brown, black or yellow aristocrats (more commonly, kleptocrats). I don’t know if a single Asian African or Latin American colony acquired freedom by a revolutionary war. Almost all were accidents of history. After 1776, I think the only two colonialisms that truly ended because of war, were Napoleon’s and Hitler’s colonizations of Europe.

The third person in the picture above explains this silence. This was Sultan Saud bin Abdulaziz al Saud, of the royal family whose name adorns Saudi Arabia. He abolished Slavery in his Sultanate in 1962. They were the last major nation to end slavery. His Wikipedia page doesn’t mention it either. I had to check the Abolition of Slavery wikipedia page to check the year. You would think he would be at least half as famous as Lincoln and that it was an accomplishment. Perhaps his mistake was not waging a war to end slavery. As was Ellenborough’s or Peel’s. India was outraged that the Republic of South Africa enforced apartheid in 1961 – so much that we cut off diplomatic relations and refused to play cricket with them). But the nation that burnt and boycotted mill clothes from Manchester never refused a drop of Arab oil.

One would think Ellenborough would at least appeal to ardent Hindus as the first English Hindutva Governor General – for bringing the gates of the Somnath temple from Ghazni.

More accurately, this says something to me about the human thought process. Neither Elleborough nor Abdulaziz bin Saud have  a constituency. No Hindu or Muslim in India wants to look  back at slavery, or abolition. No Gandhian, Congressman or Indian politician benefits from acknowledging it. No historian could sell a book about it. Anyone who speaks well of anything England did has a “slave mentality.” We’d rather salute Lincoln and Gandhi get on with it.

Here are links to Wikipedia pages mentioned above
A Timeline of the Abolition of Slavery
Indian Slavery Act, 1843
Uncle Tom's Cabin
The Earl of Ellenborough
Saud bin Abdulaziz al Saud

If this essay appalled you for its ridiculous admiration of one aspect of British rule, these essays may outrage you even more
1. An Englishman's Tamil inscription
2. Trautmann on Francis Whyte Ellis (Chennai pattanathu Elleesan)
3. Madras - India's first modern city
4. The Thames and the Cooum
5. Margaret Thatcher
6. Macaulay, Sanskrit and English
7. அடையாறு போர்