I should dismiss VarahaMihira as a superstitious peddler of astrological nonsense, making ridiculous predictions about the effects of stars and planets on people, kings, cows and donkeys. Like most scientifically minded admirers of Indian astronomy and mathematics, I should wax lyrical on Aryabhata and Bhaskara, bask in the glories of their obscure mathematics and intricate algorithms, and merely mention VarahaMihira’s Pancha Siddhantikaa, but indlugently tut-tuh his extensive horoscopic horrors in Brihat Samhitaa.

I have been asked once to talk on Indian Astronomy, specifically debunking astrology. I declined. While I don’t personally believe in astrology and horoscopes and the ability to predict events in the life of men and beasts, based on their place and time of birth, millions believe in such things, and it is not my intention to deliberately insult them or injure their feelings. I’d rather talk write and explain, what I do understand, and that which others may be eager or curious to learn.

VarahaMihira is perhaps the most prolific of Indian astronomers, based simply on his works that have survived. While Aryabhata’s treatise Aryabhateeyam (also called Aryaashtashata) is the famous for its brevity, Brihat Samhita by its very name – the Grand Compilation – is not.

Pancha Siddhantikaa is a comparative study of five great astronomical texts, excluding remarkably, AryabhaTeeyam. The latter is perhaps the most commented and translated Indian text, long after several of its axioms, data, formulae, and algorithms became outdated or were shown to be wrong or improved by later astronomers. The average science afficionado, and several writers have showered encomiums on Aryabhata for his brilliant scientific work, while often passing lightly over the fact that he has not included a single scientific proof in his text. Nor have most later Indian astronomers in theirs. This lacuna has led some to claim that mathematical proofs are purely a Greek invention.

Strangely, the only scientific explanation of an astronomical phenomenon, which can be understood even by an illiterate person with common sense, needs no mathematical expertise, simply but logically overturns the old religious superstition, and is verifiable by any observer, is provided by VarahaMihira in his Brihat Samhitaa. I refer to the first few slokas in the chapter on Raahuchaara, which explains how eclipses are caused, not by mythological snakes Rahu and Kethu, but by the shadows of the earth on the moon and the moon blocking the sun. Remarkably, unlike Brahmagupta who severely condemns and insults earlier astronomers like Aryabhata and Vishnuchandra, though in enjoyably poetic hyperbole, VarahaMihira is respectful of religious tradition and makes no personal attacks whatsoever. 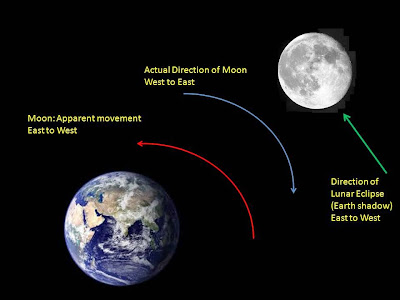 Invariant Direction This is proof by direction. VarahaMihira explains why eclipses always proceed in one direction, east to west for lunar; west to east for solar. This is because both eclipses are caused by the Moon’s orbit, which is from west to east around the Earth.

Hence the direction of the lunar eclipse (which is Earth’s shadow on the moon) is East to West. See picture for visual explanation. In a solar eclipse, the Moon continues to move from West to East relative to the Earth, so covers the Sun from the Sun’s western edge onward.

Size Difference The horns here refer to the uncovered portions of the Moon or Sun during partial eclipses. KuNtaVishaaNaa and TheekshNaVishaaNa are beautiful scientific terms in Sanskrit. VarahaMihira casually mentions that the two blocking objects are of two different sizes, the Moon is smaller and the Earth’s shadow larger, which would not be the case if they were blocked by the same Rahu.

Incidentally, he reserves the term Kethu, for comets, and never uses the term in the context of a solar or lunar eclipse.

Geometry and Timing There were several beliefs about Rahu: that he only has a head or tail, that he is a full bodied snake, that he is dark and invisible except during eclipses. In Jain astronomy, there are two Rahus. I have excluded these verses for brevity, and only list below VarahaMihira’s verses refuting each of these concepts of Rahu.

Meaning If Rahu has a body, and is identified only by a head, how does he sieze the Sun or the Moon when they are half the sky apart, when his motion is fixed (i.e. he moves in a regular orbit) ?

Meaning If his motion is not fixed, how can the eclipses be calculated in advance (as astronomers have done for centuries)? And if Rahu only has face and tail, why does he not seize the Sun and Moon, except when they half-the sky apart?

Meaning Now, if he is in the form of a full snake, but only grasps by mouth or tail, why doesn't he hide all the stars between the Sun and Moon, i.e half the Zodiac?

Meaning If there are two Raahus, then, when one Rahu grasps the Moon during rising or setting, why does the other Rahu not seen grasping the Sun simultaneously?

With these arguments, weaving geometry timing and logic, VarahaMihira demolishes the Rahu as snake theory, establishes that shadows and the Moon cause the eclipses.

It is easy to forget that until the arrival of Vasco da Gama and subsequent Europeans, paper was unknown to Indians, who for some reason, never imported it from China. In India, paper became a popular medium of documentation only in the beginning of the 19th century. Indians mostly used palm leaves and tree barks for writing.

Additionally, astronomy and mathematics were restricted to students of small schools. The general public, even the well educated, would find it difficult to follow some of these concepts. VarahaMihira intended this explanation only for astronomers. Hence, it is no surprise that the general public continued to believe in the two celestial snakes explanation.

In schools today, eclipses are taught with rote instruction, as though only Europeans explained them, and in very early classes. Since almost all teachers of science are ignorant of Sanskrit, such a simple but elegant proof is not included in any syllabus. Indian astronomers, except Aryabhata, are considered orthodox and superstitious. But here is the very orthodox VarahaMihira, with a very scientific explanation! If you are a school or college science teacher, please feel free to use this material in your class.

References Mostly, I quote from Ramakrishna Bhat’s translation of Brihat Samhitaa. I also used Chidambaram Iyer’s translation. I enjoyed reading Bhat’s book in the KV Sarma library and discussing with and learning from “Nagupoliyan” Balasubramanian.

Postscript I remember reading in one of VarahaMihira’s texts that eclipse shadows are convex, whereas if a snake were to swallow the orbs, its concave mouth would cause a different shadow. But, I cannot find it in either PanchaSiddhantikaa or Brihat Samhitaa. If anyone reading this discovers that sloka, please let me know.