Four Napoleons and the Steam Engine 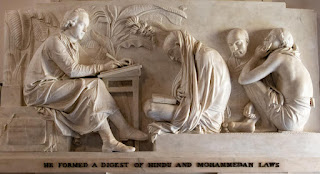 Dr VS Ramachandran sent me this clipping and photo by email a few days ago. It is a memorial  to Sir William Jones, founder of the Asiatic Society of Bengal, at the University College chapel in Oxford university. Ramachandran is a huge fan of Jones and his scholarship, and the founding of Indology (one branch of Orientalism). He believes that the Tamil Heritage Trust can continue where the British Indologists left off, and we can do this best by forming a new Indology society.

The sculpture shows Jones seated at a table, taking notes from Hindu pandits (Sanskrit scholars). This is an artist’s interpretation. One line in the website of Prof Faisal Devji, says “He was of the 'Orientalist' party, opposed by the 'Anglicists' who thought Indian knowledge and traditions worthless.”

For this essay, I use this line as a launching pad for my thoughts about this period.

I think this a very poorly studied period, except from the view of colonialism. Before the arrival of Jones and the discoveries of the Asiatic Society, Europeans had an extremely poor understanding of India. They were completely unaware of Sanskrit, its riches, Hinduism, Buddhism, Indian architecture: in fact all the sixteen items listed in Jones' list of things to study, on the ship to India.

But equally, India was almost completely unaware of the amazing progress in Europe since the Renaissance and the Enlightenment. In science, in economics, in military techniques, in seafaring, in conquest. These filtered through to large sections of society, especially Hindu society, only via the Industrial revolution and English education.

Also, there is a reason the Anglicists gained the upper hand by 1840 or so - before that Europeans may have considered themselves superior, but between 1770 and 1840 they had indisputable proof that they were superior, in several fields – science, technology, military ability, seafaring, economics, management. They were not superior to Indians in music, agriculture, medicine, art, architecture, law and order, judiciary, dispute resolution, taxation, water management, etc.

1740s-1760s The Cotton Revolution, the first Industrial revolution in England

1747: Major Stringer Lawrence creates the The Madras Regiment, the mother regiment of the Indian Army

This is all very inconvenient to the political historians. We have at least three isolated islands of history, one of military conquest and colonialism, one of technological and scientific leaps and a third of the massive collection of information about India and its civilization, the project of the Asiatic Society and similar organizations. We get these as separate streams of discourse, because for each group the other two are quite inconvenient.

At the start of this period 1770, Imperial France was a mighty rival to England in politics, finance and military strength, perhaps considered superior culturally. The Netherlands was a business equal to England. Germany equal in science and technology, but not quite unified, or even Germany. Spain and Portugal had a larger political base, but far behind in science, technology, trade.

This saw French decline in the colonies, especially their rivalry in India, but Napoleon soon became a major challenge in Europe, and threatened to even make England a French colony. In India there were three Napoleons who were a threat to England : Hyder Ali / Tipu Sultan, the Mahrattas and the Sikhs. These are insignificant names outside India, but the victories over the first two were among the most torrid and coming within such a short time, of very great significance.

But between 1799 and 1840 England saw amazing and significant military conquests in India. Lord Cornwallis who had lost to George Washington in the Revolutionary War that led to the formation of the USA, held off Tipu Sultan in one of the Mysore Wars in 1793. Tipu Sultan was completely routed and killed in 1799. Arthur Wellesley, who served first under Cornwallis, and was Governor of Mysore after Tipu’s defeat, later defeated the Mahrattas at Assaye, in 1803, and used this experience to beat Napoleon at Waterloo in 1815. Wellesley later became the Duke of Wellington. He himself said, that while his defeat of Napoleon was more significant, the battle against the Mahrattas was the fiercest he fought in his life.

And after the death of Ranjit Singh, the Sikh kingdom also fell to England. Only the weak Mughals in Delhi were left to conquer in 1857. In about forty years they conquered as much of India as Muslims did in nearly 700 years (but still less the either Chandragupta Maurya or Samudragupta did). And they were discovering things about India, Egypt, Sumeria, Persia, etc all old civilizations in steep decline, and barely aware of their own past greatness

This was also the period 1799-1840 when England discovered electricity via Faraday and others, improved the steam engine and built the railways, massively exploited mines and discovered minerals and new elements, explored the world, and went far ahead of others in the Industrial revolution.

No wonder the Anglicists felt superior, and triumphed over the Orientalists. No wonder Macaulay and Mill became the guiding lights who would bless and improve India with the benevolence of British knowledge and wisdom.

This was helped by the fact that Indians themselves wanted all the new marvels that the English brought along (long before the steam engine). Paper, printing, clocks, telescopes, a hundred tiny engineering marvels. A number of liberal and progressive Hindus also used the English to reform Hindu law and a number of customs.

Which set the stage for the next quote. Which I will write about in a separate essay.

“Both parties, however, agreed on the need to codify the laws of India's communities”

William Jones and the Asiatic Society