We think of epics, poems, grand novels, perhaps great plays, as literature. The earliest literature was usually oral and set down in writing, after writing was invented. Of the world’s  6000 languages, very few have a script, even fewer boast of written literature, and barely a dozen are classical. The globalizations of paper, and literacy, and most recently, computers, have given rise to new forms of writing, and new versions of literature.

Detective stories, science fiction, comics, newspaper essays are the great new forms of literature of the last 200 years. Advertisements and roadside banners will someday be stride the worlds of literature and art. In a speech, Tiruppur Krishnan, editor of the magazine AmudhaSurabhi, lauded the Question and Answer section in Tamil magazines as a form of literature.

SMS, blogs and tweets, the latest entrants to the field of writing, are often criticized as ruining the felicity, grammar and spelling of languages; but some are already more famous than most books, poems, plays or speeches.

I propose PowerPoint presentations as a form of literature. Specifically, the works of Swaminathan, retired IIT Delhi professor and founder of the Tamil Heritage Trust.

Most Powerpoints are a slapdash of ideas, themes, photos, doodles, graphs and tables. They are meant to be supplement the speaker, or his message. They seem primarily a business tool or a teaching aid. Rarely are they works of art, to be savored for themselves. This is where I believe Prof Swaminathan’s PowerPoint presentations stand out.

Topic They are about art, language, culture, heritage, history. Not business or technical education.

Structure They have an introduction, a theme, sections, and a flow of narrative.

Purpose They are meant to inspire you to discover what they discuss, perhaps visit the monuments described, or the history narrated or in some way get involved in the subject.

Elegance Photos, words, numbers, tables are presented in an elegant, inherently beautiful way. In the last few years I have learn something about the use of space in an artistic composition, its tone and balance. He uses space superbly and there is an inherent balance to the slides. The choice of colors for the text, the location of a photo, what feature is highlighted, and how each aspect is explained is marvelous. I’ll explain below with images.

Usage Here is the killer touch. Unlike most PowerPoints, you can go through them on your computer, without his assistance or commentary, because they are complete and self-explanatory.


It is in these two aspects, Elegance and Usage, that I believe his presentations transcend the plane of ordinariness and ascend to literature.

Take this slide, from his presentation on Indian Musical Heritage. He has compactly represented the Sa Ri Ga Ma Pa Da Ni Sa notes with first letters, in upper case. By subtly using lower case letters, he has also shown that there are 12 svaras, not 7 in Carnatic music, 5 of which are considered slight variations. A touch of grace is added by the yellow sketch in the corner. 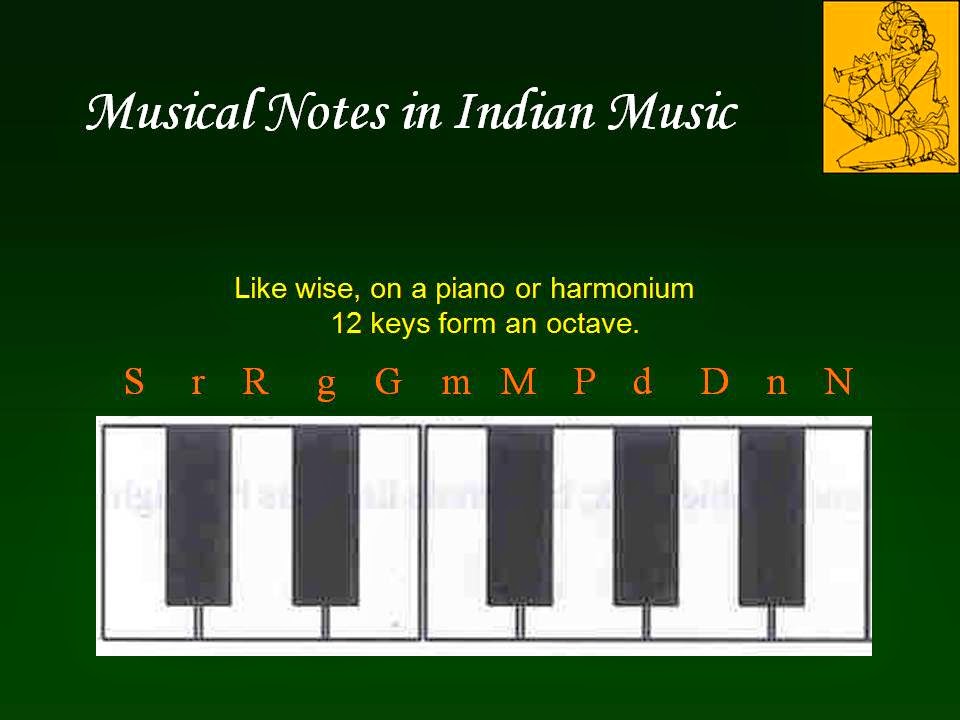 In a later slide, he explains the Sankara-bharanam raga, uses a piano keyboard layout to show the various svaras of the Sankarabhranam raga.  He compares them to other forms of classical music, namely Ancient Greek, Western Classical, Hindustani, and Ancient Tamil. The yellow sketch in the corner gives a feel of continuity to this theme. 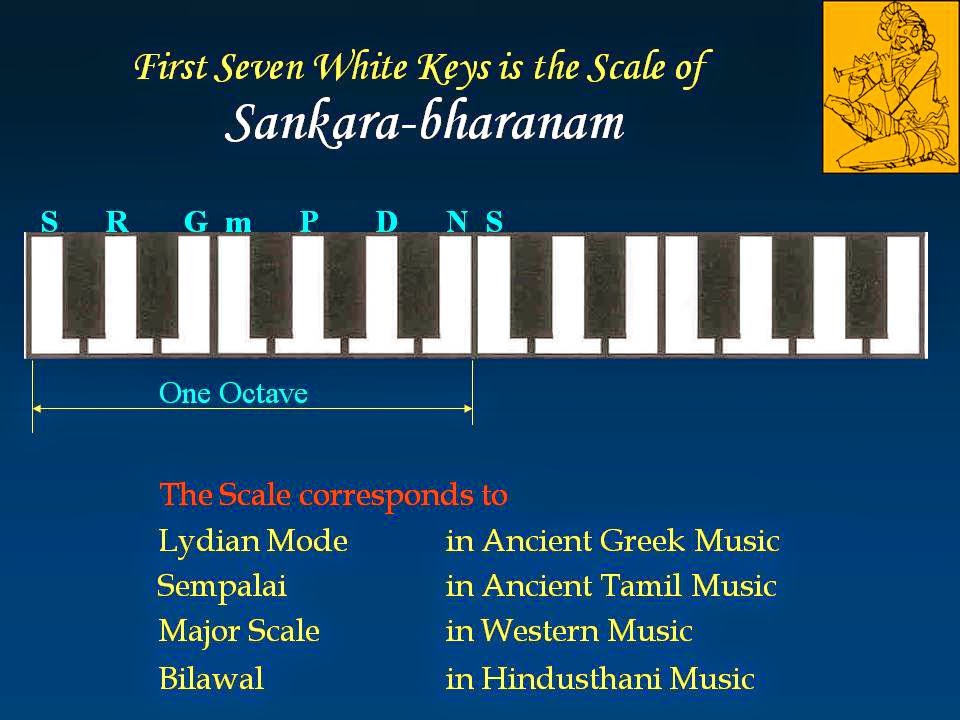 In a presentation on the Pallava cave temple in Rockfort, Tiruchi, he uses other similar sculptures to compare and contrast. The Gangadhara panel in Elephanta is used first, highlighting the position of descending Ganga, devoted Bhageeratha, coy Parvati, and various other Gods. The use of alternating colors in the text and faded background sculpture are typical. The text here is simple and descriptive. 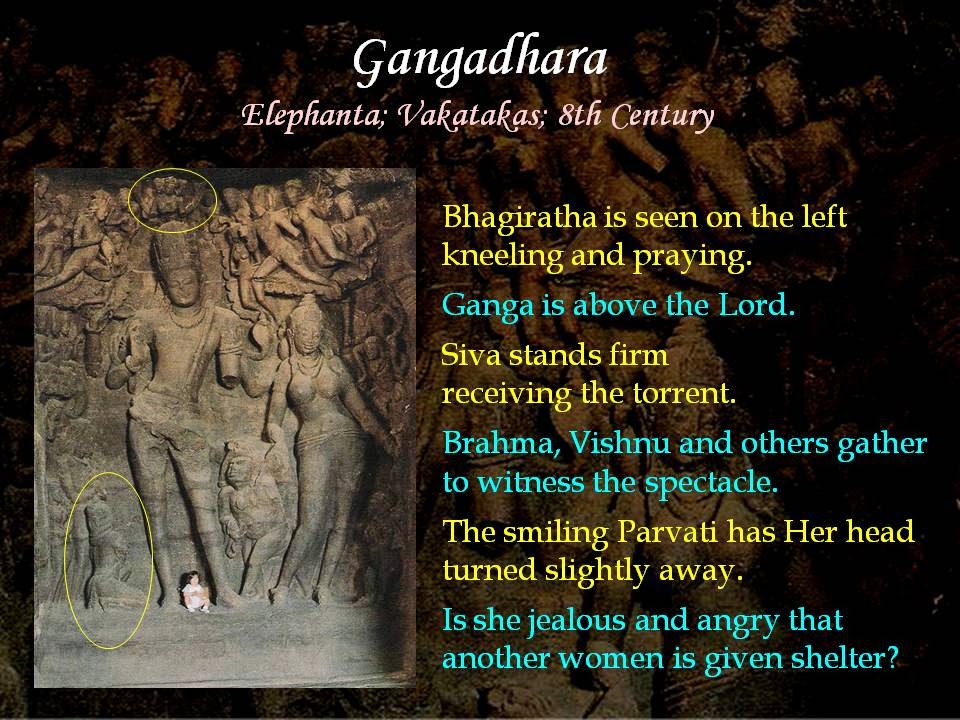 Whereas, the text in this slide is concise and very informative. You are informed that this is the earliest Gangadhara in Tamilnadu. The composition is described as a puzzle. The further slides explain the puzzle. 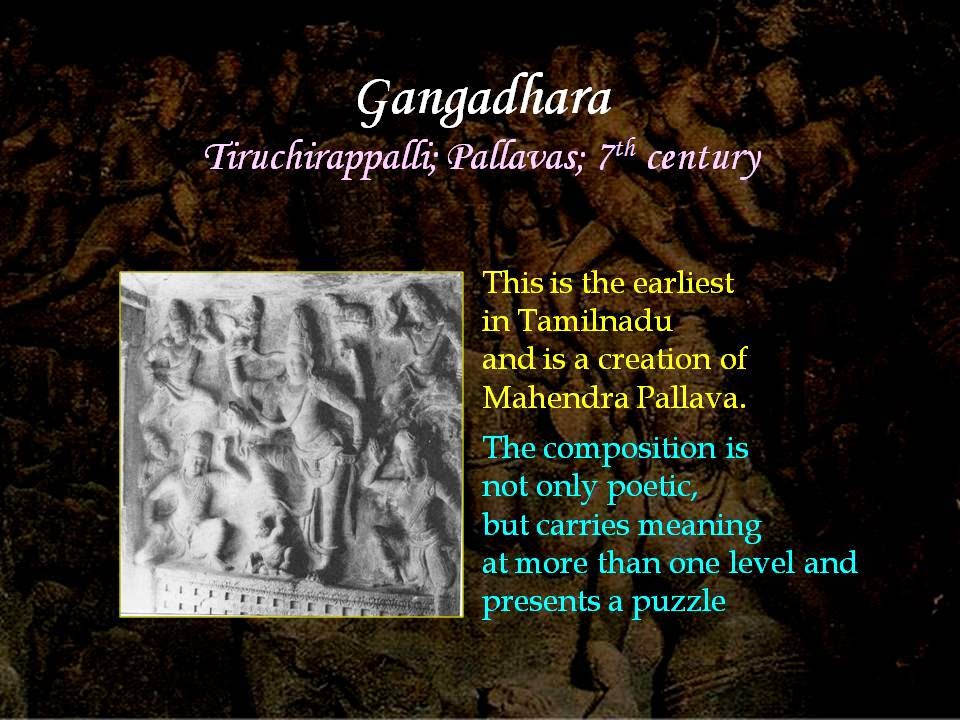 Another aspect is the effort he takes in preparing very illustrative slides. Take this from Oral Tradition of Sanskrit. The title alone should pique one's curiosity. But the presentation here is well thought out. First the sloka; then the individual letters of the sloka, grouped by verse; then syllables with the letters L & H showing which is Light (laghu) and which is Heavy (guru). This technique brilliantly illustrates the intricacy of candas, i.e. metres of Vedic poems. 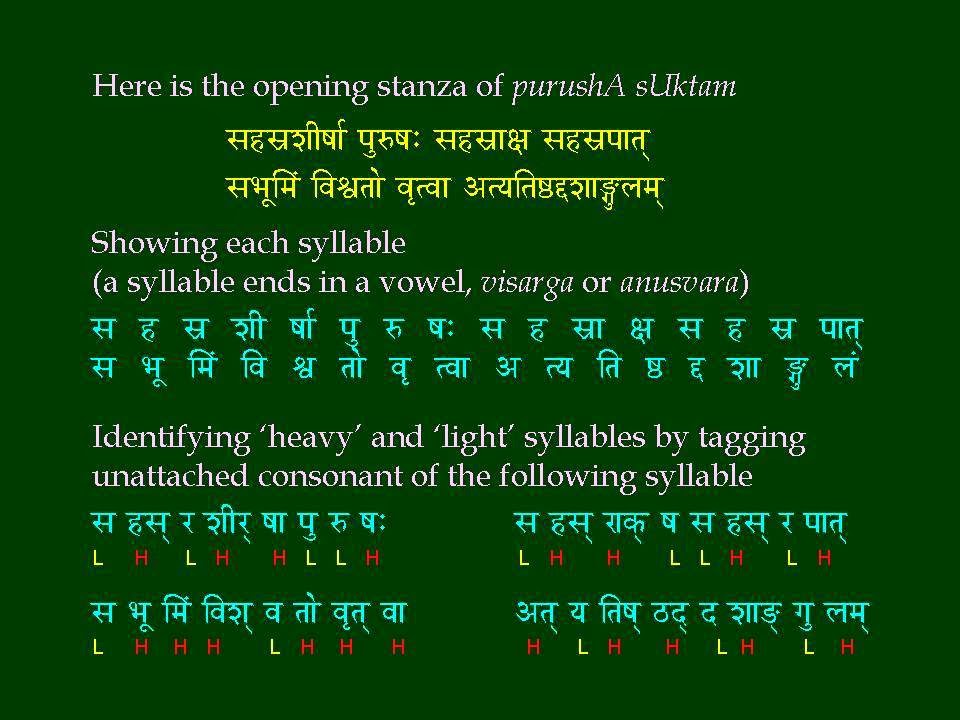 From his Story of Scripts, the first series I had the pleasure of attending in 2008, this slide introduces Brahmi and Kharoshti, the two oldest known scripts of Sanskrit. Here he uses a story telling technique: foreshadowing. The gold coin in the upper right corner contains a Kharoshti inscription. The entire border of the slide on all four sides are filled with segments of Brahmi script. Note again the brilliant use of space. The text is sparse and powerful. 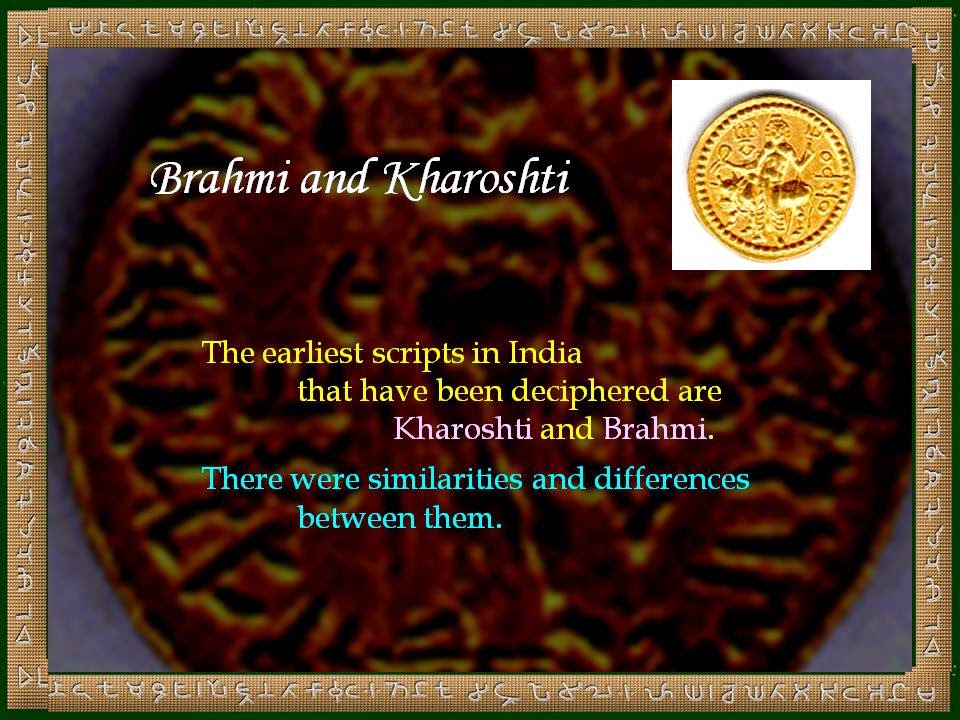 As a final example, consider this one. The Brahmi border continues. The background subtly shows the showcased script. The vattezhuthu, which is unfamiliar to most people, is shown letter by letter, with the modern Tamil and Roman characters in corresponding places. 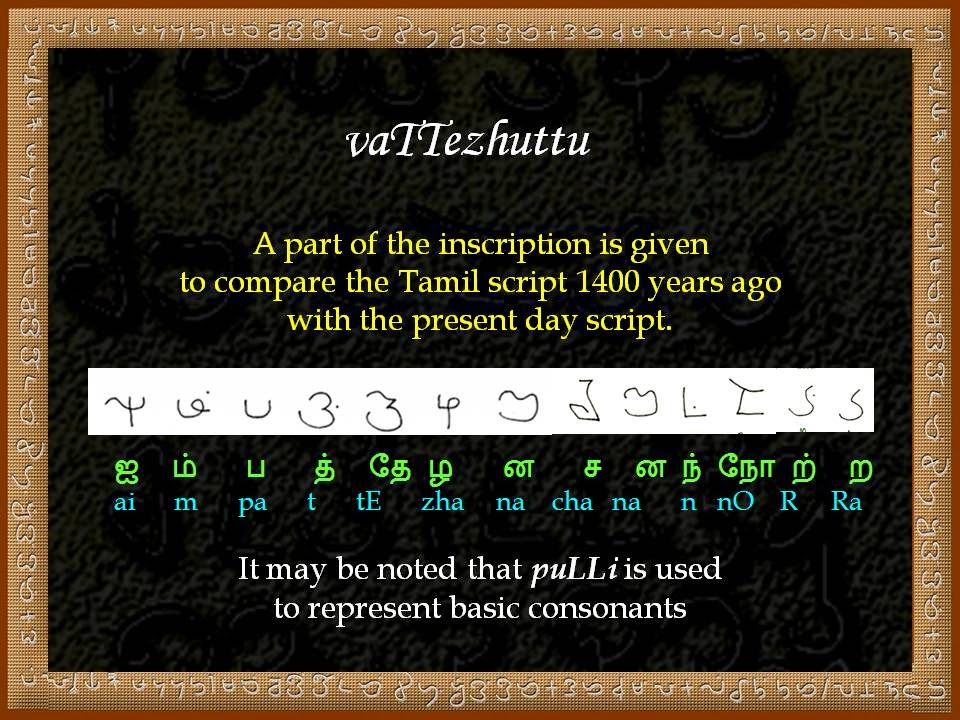 I have merely used the slides in a demonstrative manner. They are best seen and understood, in proper context. Two of his masterpieces are the presentations on Mamallapuram and Ajanta. I have included the PowerShow links to his presentations, but you can login to GMail with

Email him at sswami99@gmail.com for more information. Or regularly attend our programs. Best of all, catch him in person: this week (November 2014), he will be presenting a lecture on Pudukottai monuments, at 4pm at Tamil Virtual Academy, Kotturpuram, Chennai.