There is a statue called Triumph of Labour, opposite to the Senate Building of the Madras university and adjacent to the MGR and Jayalalitha graves at the Marina beach in Madras. This was designed by Roy Chowdhry, a former Principal of the Government College of Fine Arts, Egmore. The college is only  a couple of miles away from the statue.

It depicts four people straining their sinews in hard physical labour, trying to move a large boulder with a long rod. It was not only art, but a political statement, a celebration of Marxism and democracy. a tribute to the Labour movement of the early twentieth century.

There are several other statues in the Marina beach, mostly commissioned and installed to mark the World Tamil Conference held in 1968. The previous year 1967, the Dravida Munnetra Kazhagam won elections and formed the government. These statues are celebration of Tamil literature, culture and the Dravidian movement, an alternate to the Congress and the Communist parties that were popular until then in Tamilnadu. Hence there are statues to ancient poets Tiruvalluvar, Ilango  and Avvaiyar, modern poets Subramania Bharati and Bhaaratidaasan, and Kannagi, the heroine of the Ilango’s great epic Silappadikaaram. A statue for the medieval Tamil poet Kamban was added in 1971.

Three foreigners who enriched Tamil literature were also  honored with statues. They are : Italian priest Constantine Beschi (who called himself Veeramaamunivar in Tamil and wrote the story of Jesus Christ as the Tamil epic Tembaavani,), English Bishop Robert Caldwell, then considered the discoverer of the Dravidian language family, and GU Pope, who translated Tirukkural and Tiruvaasagam into English.

Before the era of British rule in India, statues in public were rare. There are no mentions of such statues in literature and no archaeological evidence. After India became independent, Indians adopted the British custom and festooned the country with statues of politicians in practically every street. In Madras, there are also statues to poets, authors and cinema actors.

While most of these other statues in Chennai may not excite connoisseurs or critics of art, the Labour statue is quite noteworthy. But rarely do visitors come to see this statue for its artistic merit. It is simply something else to on their way to the beach. People who visit Madras to see sculptures visit either the Egmore museum or Mamallapuram.

Temples are the galleries of art of India, for painting sculpture or architecture. They are the monuments which are renovated least and hence offer the best snapshots of the past. Parthasarathy temple in Tiruvallikkeni is perhaps the temple in Chennai with oldest sculptures, of the Vijayanagar period.

Art historians consider Mamallapuram the cradle of Dravidian architecture and sculpture. (Here Dravidian refers to a style of sculpture as per the Hindu shilpa shaastras, not the language family or the political movement). Some of Mahendra Pallava’s caves precede Mamallapuram, but have few sculptures, all of Gods or dvarapalakas. Few people visit them. From the Pallava era, and even earlier, till now, temples are the primary art galleries of not just Tamil country, but also India. Several historians and scholars, primarily Marxists but also quite a few others, inject political and social perspectives to temples and sculptures, but the fundamental intention of temples continues to be religion. The art serves the religion.

In the centuries that followed Mamallapuram, when temples in granite proliferated the Tamil country, the sculptures of the Pallavas, Pandyas, Cholas or their feudatories, all depicted episodes from the itihaasas Ramayana and Mahabharata, the Puranas or the episodes from the lives of the Alwaars or Naayanmaars. Only from the Vijayanagar era, ordinary people, kuravan kuratti, scenes of daily life etc started to proliferate.

But Mamallapuram is an exception.

The Worker Sculptures of Mamallapuram

The Great Penance panel in Mamallapuram or Mallai, depicts either Arjuna or Bhagiratha in penance, as Siva appears to grant his book. Devas, Gandharvas, Rishis, Vidyadharas, Kinnaras, Kimpurushas, flock to see this marvelous sight. A number of birds and animals are also featured in the magnificent spectacle. Among these are four hunters, or kiraatas. Kiraataarjuniyam was a great Sanskrit epic, composed by Bharavi around this time. Siva disguised as a kiraata arrives to test Arjuna : the test turns into a war first of words, then arrows, then hand to hand combat. The Penance panel doesn’t feature Siva as a kiraata, but the four kiraatas in the sculpture may indicate this episode. They all carry tall bows, but none bears the carcass of a hunted animal. One carries a jackfruit.

They are not gods, or royalty or landed gentry, but daily toilers. They are not shown lifting or moving something heavy, straining their muscles, suffering from the heat of the midday sun, or sweating profusely. They are working for themselves, not being exploited by a moneyed class. Nothing for a Marxist to criticize, an union leader to organize, a writer or artist to lament, or a social justice warrior to exploit. There maybe some scope for an anthropologist or an art critic, but they generally seem to have ignored such sculptures.

A curious aspect is their neutral expression – there is none of the vismaya of the celestials, the languidness of the animals at rest, or the delight of the elephants charging towards the water.

A stone’s throw from the Penance panel is the Govardhana Panel. Krishna lifts the mountain with his hand, with Balarama Subhadra and a host of the Yadavas and their cattle all taking refuge under it. The most remarkable aspect here is the utter normality of village life while a storm rages all around. Here a cowherd milks a cow, a lady vends her buttermilk, another carries a pile of straw on her head, a man plays the flute, his wife warns him that it is disturbing the sleeping baby, and so on. All people at work; but the primary intent of the sculptor is show the Grand Deed of Krishna, not the toil of the workers.


The Dharamaraja ratha, tallest of the Five Rathas, features several marvelous sculptures in the second and third floor, mostly of Siva and some of Vishnu, and their devotees. Among these are five temple workers – a priest (archaka), an attendant with a bell in his hand (parichaaraka), a cook (svayampaka), a water bearer (a lady with a pot) and a musician (oduvaar). Four of these are on the eastern wall, the lady with the pot is in the western wall. 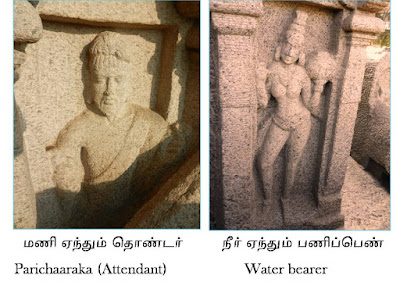 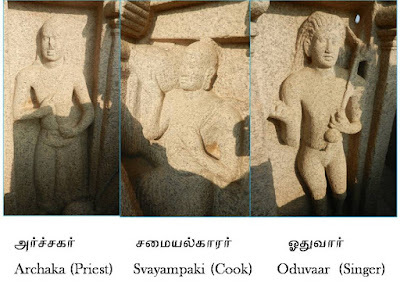 As temples became bigger, they acquired a larger band of workers, but none of the later Pallava or Chola temples ever depicts a single such worker.

In some temples of the Nayak era, sculptures of kings, queens, ministers, generals and donors are etched on some pillars. But in the ancient and medieval era, not a single poet, administrator, artist, architect, businessman, scientist, scholar, were apparently considered fit to commemorate with statues in temples. We have no idea what Kamaban Tiruvalluvar Ilango Avvaiyaar and others looked like. We don’t even know the names of the sthapathis and silpis of most of the temples, leave alone portrait sculptures. Perhaps some were featured in paintings in palaces or palm leaf manuscripts or other forms of painting, now lost.

In this respect, the statues of the workers, commoners as depicted in Mamallapuram remain unique.

If you liked this essay, check out other such essays by me

Art Essays
A Connoisseur of the Commonplace