If there is a Heaven

When the Sakya prince Siddhartha renounced his family, palace, kingdom and duty to search for the Truth, he left Kapilavastu and wandered to several places, before his great epiphany at Gaya. One of the cities he visited was Vaishali, a city-state governed by a guild of businessmen. “If there is a Heaven, it must be at least as rich and at beautiful as Vaishali,” he remarked. Siddhartha may be best known for his renunciation, but he knew a thing or two about wealth and beauty.

On his further wanderings, he met the most powerful, ambitious, feared man of his times – Bimbisara, ruler of Magadha, with his capital at Rajagriha, the Abode of Kings. A puzzled Bimbisara asked Siddhartha why he would leave queen and kingdom, wealth and power, to wander around as a monk. When Siddhartha explained about his search, Bimbisara merely said, “If you find, please come and share your enlightenment with me.”

Several years later, the beggarly monk Siddhartha believed he had attained enlightenment, and after preaching his message to those who would listen, mostly others in search of the same, he returned to Rajagriha to keep his promise to Bimbisara, now far more powerful, the conqueror of several kingdoms. And on the mountain of Grihakuta, Gautama Buddha held sermons for Bimbisara, his first royal disciple. On top of this hill, Buddha convened and conducted his first Council of the new religion he had founded.

Of Buddha and Rajagriha, later. For now, Vaishali.

It is not the world famous Buddha, but the mighty Bimbisara with whom the city of Vaishali is most closely associated. And more than with Bimbisara, a dancer, a courtesan, a woman of unparalleled beauty – Amrapali.

Briefly, the story is that when Amrapali, an extraordinarily beautiful woman entered the streets of Vaishali, the richest men in the city fought each other, vying to possess her as a wife. Seeing that no man had an advantage over another, they held council and declared her a public woman. Any man could have her for the evening for her price. She learnt the various arts and excelled any woman they knew in dancing. One day, while she was dancing, there was an alarm over an invasion, a call to arms and the announcement that a king was invading their beautiful city – none other than Bimbisara.  For the next several days, while the men prepared for Bimbisara’s siege and eventually, war, Amrapali had no visitors. Until one day, a handsome young man visited her, and returned every day for several days, and finally proposed to her. She then explained to him that her loyalty was to the city itself, that she could marry no man, as that would incite jealousy in every rival and bring strife to Vishali.  The heartbreak in her suitor’s expression must have been visibly moving. Curious only now, she asked him who he really was, as she had never seen him in the city before, and all the able men in the city were too worried about an impending invasion to spare time even for Amrapali.

He told her who he was – Bimbisara. How he managed to enter the city undetected and unaccompanied is a detail best left to unromantic fact fanatics, but whatever his disappointment was, it paled in comparison to the spectrum of emotions that Amrapali suffered. Horrified that she had spent weeks delighting the very scourge of the city to whom she felt unshakeable loyalty, fearing the consequences of her unknowing betrayal, torn with longing that she could simply leave the city and spend her life as the beloved of a man, so obviously enchanted with her, she sent him away to spend time alone. Madly in love with Amrapali, heart rent, with  no further interest in the city she lived, and seeing not the earthly paradise that Siddhartha had seen earlier, Bimbisara merely withdrew his siege, and went back to Rajagriha, to console himself in the arms of other gorgeous women and mere royal delights, but still, no Amrapali.

The citizens of Vaishali, though, found out that their favorite woman had entertained their most feared enemy while they spent the same time in abject fear of annihilation. Outraged, betrayed, disgusted, they chased her out of Vaishali into the forests tossing curses and stones and cries of contempt upon her fleeing form, ignoring all pleas of guileless innocence. Time passed, not healing her at all, as she lived in  a hut with her most loyal attendants, heart broken, beauty shattered, her soul leaking life every day, until one day she had another visitor. A man who radiated peace and wisdom, kindness and compassion, and whose ambition far surpassed that of Bimbisara or any royal conqueror. For this man wanted nothing less than to conquer all humanity and with his newfound wisdom. Gautama Buddha.

To Amrapali, now, as to Bimbisara earlier, he brought a healing touch to a soul torn asunder by the cruelty of circumstances and human cruelty. Amrapali finally found a place in his Order, his Sangha, as a nun.

The Buddha then wandered to several places and finally his soul underwent the final extinguishing – the Maha Pari Nirvana, in Kushinagara. His body was given to his family at Kapilavastu to be cremated, but with some parts distribued to the other seven of his Eight Great Events, one of which is Vaishali. Mud stupas were erected over his relics, buried in caskets at these places by his followers.


In later times, an even more famous and powerful king, Samrat Asoka of the Maurya dynasty, ruling from Pataliputra, decided to rebury these famous relics. In Vaishali he built a stupa of stone, some distance away from the original, convened a Council of Buddhists and granted land and resources for establishing a monastery. Several monks of this monastery were then later buried and stupas of various sizes and shapes erected for them, in order of their accomplishment and services to Buddhism in the esteem of their fellow monks.

Near the brick stupa is a tall majestic pillar, of polished sandstone, that is most symbolic of Asoka. Unlike the three-lion capital of the Sarnath pillar, which is now the emblem of the Wovernment of India, the Vaishali pillar has a one lion capital. The pillar made of sandstone, is smoothened by the technique of Mauryan polish, and glints like metal by the light of the evening, evoking awe in such admirers of India as Sir William Jones, the founder of the Asiatic Society of Bengal, James Prinsep, who rediscovered Ashoka and decoded the Brahmi script, and Sir Alexander Cunningham, who established the Archaeological Survery of India, which preserves these monuments.

I visited Vaishali in 2011 November as a guest of my friend RajaGanesh, who was working for the Patna branch of IndianOil. His friend Rahul loaned me a car and his driver Valmiki, who knew only Hindi, whereas my Hindi was scattered and flawed, tenseless, caseless and with few pretensions of cogent expression. With me was my friend Karuna from Madras, who had accompanied me the previous eight days with me in Orissa and Calcutta, and with whom I have travelled to other places
too, like Ajanta and Kanchi.


Vaishali’s history goes back much earlier than the time of Amrapali, Bimbisara and Buddha. It is named after its founder Raja Vishala. Not far from the mud stupa, are the remnants of Vishala’s palace, a low level of bricks designating walls, similar to the ruins of Harappan cities. 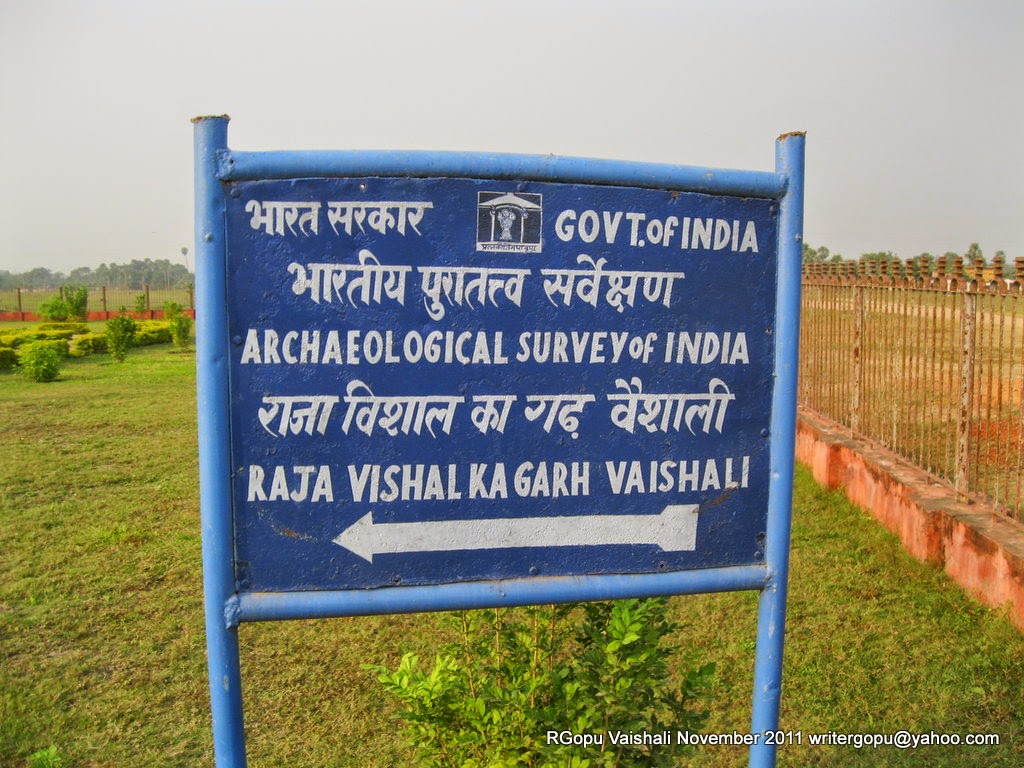 What I saw of Vaishali in 2011 was a small farming village – similar to GangaiKonda Cholapuram or Vijayanagar. In one segment, there were some farmers houses in concrete, with cement poles for electric or telephone lines, but no actual wires. The route to the mud stupa was lined with Indian mud huts, where farmers live; and in stark contrast, concrete three storey Buddhist hospitality centers all run by trusts of Buddhist nations – Sri Lanka, Vietnam, Cambodia, Burma, Thailand etc.


Vaishali was recently in the news, globally, for all the wrong reasons - friends of students writing board exams, climbing windows to pass cheat sheets to the examinees. The brick building of the exam center shows several things – some modernity during Nitish Kumar’s reign, but the relative poverty of Bihar compared to most of India, the ambition of its students and the lawlessness of the society. On my return to Patna from Vaishali after sunset, I saw not a single electric light anywhere, except one small town halfway back. Nor a single bus for public transport. Even oil lamps lit only a few households.

The poverty of Bihar, especially Vaishali, was in stark contrast to Siddhartha’s bedazzlement.

But there is more to Vaishali’s history and heritage than Buddhism. I shall write about it soon.

6. The Greenery of the Chola country