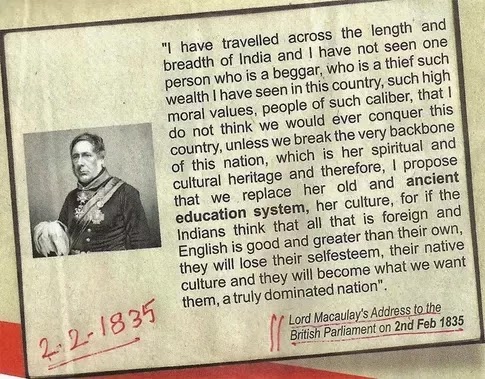 A classmate asked me, if the above comment by Macaulay was true.

No, that's a false quotation. This is a frequently circulated paragraph, which exploits the eagerness of some Indians to believe that English rule was very destructive, especially of India's "ancient education."

Why Macaulay, not Clive or Hastings or Cornwallis or Dalhousie, the different powerful Viceroys of India? Because this purports to be a quotation from his famous essay, Minute on Education. I first saw this about ten years ago, which simply made me curious about this essay, and thanks to internet, I saw the full text on Columbia University's website. There are several refutations of this quotation also, among which the best arguments are by Michel Danino, and quoted in Quora. I urge readers to read both Macaulay's Minute and Danino's response.

An obvious clue should be the phrase "not one person who is a beggar, who is a thief." There is no country in the world with neither beggars not thieves, and India is and was no exception.

Macaulay was an English supremacist and had contempt for Indian and Sanskrit literature. He made the most dramatic changes in Indian governance - but we have kept most of them.

The East India Company gave subsidies for Vedic patashalas and madrasas for teaching Quran, continuing practices of the kings they defeated. He ended those subsidies and introduced Science, Maths and English into Indian schools and colleges. Personally, I believe Macaulay did India a great favour on this aspect. Those who read Macaulay's Minute would realize that his intentions were noble, though his ignorance of Indian heritage was lamentable.

Sanskrit scholars of English descent (members of Asiatic Society) like Horace Wilson and James Prinsep, opposed Macaulay's plan to introduce English as language of education in Bengal Madras and Bombay provinces, warning that Indians will lose all sense of pride of their native languages and culture. That these people, whose services to India and its culture should be in every history textbook, at least in India, are not acknowledged, speaks volumes of the prejudices of the Indian Government and its textbook writers.

A similar debate happened later between Gandhi and Tagore - Gandhi wanted the abolition of English language, abandonment of democracy, abolition of railways and western medicine. His most strident clarion call was for Indian citizens to boycott English courts, especially their law practices, and the most patriotic lawyers of the Congress Party, indeed did exactly that, giving up very lucrative careers. These include Gandhi himself, Jawaharlal Nehru, Vallabhai Patel, Rajagopalachari (Rajaji), Rajendra Prasad and Maulana Abul Kalam Azad. Two major historical non-Congress politicians who did not boycott courts were Mohammed Ali Jinnah and Bhimrao Ambedkar.

Tagore hotly criticized Gandhi for being parochial.   "The winds of all national cultures must blow into the house of India which should not become a closed prison" he warned.

After 1947 Nehru followed Tagore rather than Gandhi in this aspect.

During the writing of constitution of India there was another debate whether Hindi or Sanskrit should be India's national language. The loudest voices in favor of Sanskrit were that of Ambedkar and a Muslim we have mostly forgotten, who argued that Sanskrit was the language of scholarship and learning for several thousand years where as Hindi was merely the language of the bazaar and had no scientific of legal literature. Also Hindi speakers should not make others second class citizens, whereas Sanskrit was equally difficult for all being no one's mother tongue.

Hindi won the contest by one vote - the casting vote of Rajendra Prasad, the president of the Constituent Assembly

My friend Balaji Dhandapani sent me this message :

Dear Gopu. The Muslim member of constituent assembly who fought for Sanskrit as the National language is Mr. Naziruddin Ahmad of West Bengal. This is what he said in the assembly when the debate came on :

If you have to adopt any language, why should you not have the world's greatest language? It is today a matter of great regret that we do not know how with what veneration Sanskrit is held in outside world. I shall only quote a few brief remarks made about Sanskrit to show how this language is held in the civilised world. Mr. W. C. Taylor says, "Sanskrit is the language of unrivalled richness and purity."

Dr.P.Subbarayan from Madras presidency fought for Hindi with Roman script. !!!

It is the pattern of ruling dispensations to glorify themselves and shower those whom they have overthrown with contempt and calumny.

It is sheer irony that most Indians criticize British for most of the problems and flaws of independent India, while generally ignoring all the best that they have done for us, except for passing remarks that English or cricket was their best gift. It is sheer hypocrisy, considering that most of the political financial military administrative educational institutions today are English or European in origin or inspiration.

Fortunately, we have no copyright on such hypocrisy.