A History of Pallava Grantha

Pallava Grantha is a script used to write Sanskrit in South India, especially in Tamilnadu, while Nagari script was mostly used in North India. Copper plates with Pallava Grantha are seen beginning around the fifth century. The modern Tamil script seems to have arisen from Pallava Grantha, slowly replacing vaTTezhuttu, which continued to prevail in Pandya territory until the tenth century.

A language is sounds, words and grammar. All human languages are oral. Homo sapiens have been speaking in languages ever since the larynx evolved, which anthropologists estimate occurred between 200,000 and 40,000 years ago.

Scripts are far rarer and more recent. They were designed to capture sounds in writing. Writing may have first evolved in Sumeria around 6000 BC. China and Meso-America are perhaps the only other cultures to independently invent scripts. Of the ancient scripts, Harappan script of the Indus Valley civilization, remains the only yet to be deciphered.

While language is natural to all people from stone age tribals to the most advanced cultures, and is naturally acquired by children, writing requires special training and materials. Until the nineteenth century, few nations surpassed a ten percent literacy rate.

Scripts are of four major types : pictogram, ideogram, alphabetic or syllabic. Languages are grouped in several families.  A discussion of these is beyond the scope of this essay.

While each language is associated with a specific script among the general public, most cultures have borrowed their scripts from some other language. Most European languages are written in Roman or Cyrillic script, which borrowed from Greek. Greek, Hebrew, Arabic and other Mediterranean languages borrowed their scripts from Phoenician, which may have borrowed its ideas but not the letters from Egyptian hieroglyphics.

Most scripts have evolved over the centuries. Egyptian was written in old hieroglyphic, middle hieroglyphic and then Demotic. All Indian scripts in use today for Indian languages are descendants of Brahmi, except for Urdu which uses Arabic script and English, which uses the Roman script.

The oldest Brahmi script is found in the rock and pillar edicts of Maurya Samrat Asoka, in the third century BC. It was succeeded in the second and first centuries BC by the inscriptions of Kharavela in Bhubaneshvar, Orissa; Satavahanas in several caves of Maharashtra, the Amaravati stupa and some coins;  etc. These are all in the Prakrit language. The Girnar rock in Junagadh, Gujarat, has the earliest known Sanskrit inscription of Rudradaman, a king of the Kshatrapa dynasty. Several Sanksrit inscriptions in Brahmi follow. A number of coins of Indo-Bactrian kingdoms were discovered in the nineteenth century, from European archaeologists and philologists unraveled some of their history.
Tamil inscriptions in Brahmi were discovered in caves and stone beds in the twentieth century. First mistaken as Prakrit, the presence of special letters for La, zha, Ra, na not found in Prakrit confirmed that they were Tamil.

Around the fourth century, northern Brahmi slowly morphed into the Nagari script and its descendants, while Tamil Brahmi morphed into vattezhuttu. At some point, Pallava grantha emerged as the prefered script for writing Sanskrit in south India, especially Tamil country, though archaic Telugu-Kannada was also used in the medieval era.

Athiranachanda mandapam in Saluvankuppam near Mamallapuram, and Kanchi Kailasanatha temple are the only monuments in Tamil country with Nagari inscriptions, before the twentieth century. A number of coins of Chola period bear Nagari inscriptions too.

Brahmi is the parent script of all extant Indian scripts, about twenty. Pallava Grantha can boast a far greater family. Ninety six scripts, mostly Southeast Asia are offspring its offspring, including those for Thai, Burmese, Laotian, Cambodian, Javan, Sumatran, Tagalog, besides those of the South Indian languages.  Some of these south east Asian countries also have  Sanksrit inscription in Grantham. Some have phased out Grantham and adopted the Roman script, after the advent of European colonialism in the recent few centuries.

Inscriptions on rock, copper plates and coins are the only survivors of the history of these scripts. Documents in palm leaves and bhuj patra do not have a long shelf life, especially in tropical climate like India. Over the centuries, documents in these languages have been copied from one script to its successor. For Tamil, the medium itself has had a significant influence on the evolution of the script. For example, use of a nail on palm leaf may have led to a tilting of letters which led to the rounded shapes of the letters of vattezhuthu (which literally mean round letters). Also the dot, called pulli in Tamil

There is one major difference between the scripts of Tamil and Sanskrit/Prakrit. The letters in Tamil are always written in one row, one after the other, in Brahmi, vattezhuthu or Tamil, whereas Sanskrit or Prakrit conjunct consonants are stacked vertically, with the mey ezhuthu on top and uyirmey below it.

Most of the cave temples of the Pallavas and Pandyas in Tamilnadu bear Pallava Grantham inscriptions, if they are in Sanskrit. The famous ones include, Mandagapattu, Mamandur, Dalavanur, Siyamangalam, Mahendravadi and Mamallapuram. In the latter, the monoliths and structural temples also have Grantham inscriptions. Pallava structural temples in Kanchi, Panamalai, and Vayalur also bear them

The Anamalai cave temple in Madurai, besides Kudumiyanmalai and Tirumeyyam are contemporary Pandyan monuments with inscriptions in Grantham. From Nandivarman Pallavamalla’s era, Tamil inscriptions begin to replace Sanskrit inscriptions. Lalitangura Pallava Grham, the cave temple of Mahendra at Rockfort, Tiruchirappalli has inscriptions – his birudas or titles - in Sanskrit, Telugu and Tamil, the first in Pallava grantham. These are on the pillars. Mahendra’s birudas in Tamil and Telugu there are written in a script that seems like a modified for letters in those languages. Quite like Tamil Brahmi of the earlier era.


Several hero-stones have been discovered in the Pallava territory with inscriptions in vattezhuthu, even in the era of Mahendra Pallava.

Language and Literature in Tamilnadu

This table attempts to capture the rough outline of language and literature in Tamilnadu in the early historical period. Tamil is that rare Indian language which can boast of an antiquity and classicism, rivaling Prakrit and Sanskrit. The researches of British scholars like FW Ellis and Bishop Caldwell, and Ellis’ Indian collaborator Sankaraya, in the nineteenth century, revealed that Tamil belongs to a different language family, the Dravidian. While Tamil vocabulary, metaphor, grammar and prosody have borrowed from Sanskrit, the language retains an idiom and aesthetic distinctly different.

This chart tries attempts a rough outline of Sanskrit literature in India, in roughly the same era. There was an efflorescence of Sanskrit literature in the Pallava period in Tamilnadu. Famously the poet Bharavi visited Kanchi and wrote a famous poem about its glory as a city. Mahendra Varma, the Pallava king, is famous as the author of two plays, MattaVilasa Prahasana and Bhagavad Ajjukam.

The poet Dandin also lived in Kanchi, during the reign of Parameshvara I and his son Rajasimha. Dandin composed Kavya Darshana, Dasha Kumara Charita and Avanti Sundari Katha. The Chola and Vijayanagara periods saw Kanchi host such stalwarts as Ramanuja, Appayya Deekshita and Vedanta Desika, composers of many magnificent works in Sanskrit. The Ekamreshvara temple has an inscription mentioning Upamanya Bhakta Vilasa, a translation into Sanskrit of Sekkizhar’s famous Tamil work, the Periya Puranam.

Sanskrit served as the court language of the Pallavas, so it is no surprise that their inscriptions are in the Sanskrit language. 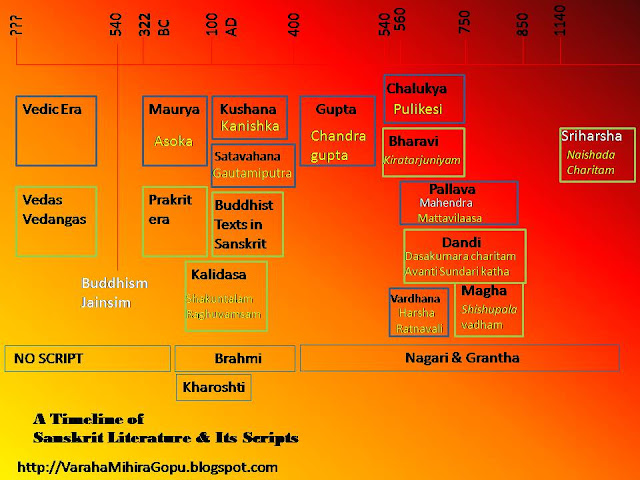 Rajasimha has caused four variations of script to be inscribed on the walls of the Kailasanatha temple in Kanchipuram. Two of these are Nagari, one simple, the other calligraphic, with marvelous decorative floral, creeper and bird patterns, not seen anywhere else. Two others are Pallava Grantham, one simple, the other more stylistic. All four of these can be seen on four different levels on the garland of minishrines that ring the main sanctum. The establishment inscription on the outer wall of the two sanctums, RajaSimhaPallaveshvaram and MahendraVarmeshvaram, as also the inscriptions ascribed to Queen Rangapataka on the outer minishrines, are all in the stylistic Grantham.

In the earlier monuments of Mamallapuram, two styles of grantham are seen. One style, is prevalent in the inscriptions of Ganesha Ratha, Dharamraja mandapam, Athiranachanda Mandapam, Ramanuja Mandapam, AdiVaraha Mandapam and the Shore temple. The other a more linear style, is considered to be older and is found only in the Dharamaraja Ratha. 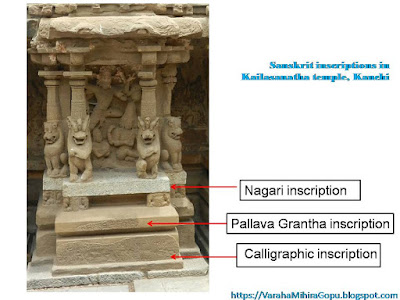 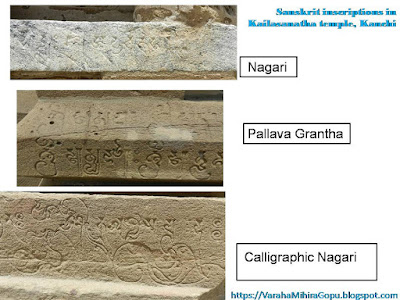 The scripts of the languages of several south east Asian nations, including Thai, Javan, Sumatran. Burmese, Tagalog, Khmer, Vietnamese and Laotian are descendants of the Grantham script. In more recent times, especially after the advent of European colonialism in the last few centuries, this has changed. Languages like Bahasa Malaysia and Bahasa Indonesia now use the Roman script.

January 24, 2018 I add this note, a day after posting this blog, to clarify a point, based on Vanpakkam Vijayaraghavan's comment. Grantha has changed considerably since the Pallava era - see pictures below. Every hundred years or so, some of the letters were modified ever so slightly, according to the whims of the scribes, until we reached the modern form. I have not attempted to show any of the intermediate forms (these are superbly listed in C Sivaramamurthi's book, for not just Grantha, but other Indian scripts also.)

If you liked this essay, you might find these also:
1. An Introduction to Kanchi
2. Grantha in Kailasanatha
3. Atyantakaama Pallava's Musical poem
4. The Rediscovery of Brahmi
5. A Timeline of sanskrit literature
6. Athiranachanda surprise- Babington's gift
7. Calligraphic Nagari in Kailasanatha
8. An Introduction to Ancient scripts - Prof Swaminathan's Powershow slides
Posted by VarahaMihira Gopu at 16:21