This year, instead of our usual Pechu Kacheri, Tamil Heritage Trust will host an Indology conference, entirely online. The driving force for this conference is Dr Vilayanur Ramachandran, the famous neuroscientist, author of “Phantoms in the Brain”. Several years ago, Prof Swaminathan, Sri Kannan, Dr Sri Annamalai, Sri Badri Seshadri, Sri TK Ramachandran and others attended one of his lectures, at the end of which they decided to start Tamil Heritage Trust. Ramachandran gave a talk at THT on Art and the Brain a couple of years later. For the last four years he met us every December and tried to get this going. In January 2019 he announced it a THT lecture. Earlier this year, he announced it to a much larger audience at the Indian Science Festival, Pune, organized by Varun Agarwal of Aspiring Minds. We made plans for a conference in February, but the corona lockdowns convinced us that it wasn’t feasible this year. But several persuasive emails from Ramachandran, and a very forceful argument by Shyam Raman at one of our discussions, convinced us to conduct this and we are on!

I hardly knew anything about Indology ten years back. The interest in Indian heritage kindled by Kalki, and enhanced by the lectures of Dr Chitra Madhavan and Prof Swaminathan, was sustained by the monthly lectures of THT, and enhanced by Site seminars. In fact, for most of the volunteers and organizers of THT, these were the entry points and stepping stones. One of our desires, especially for Prof Swaminathan, is that every city and town and village in India have such organizations like THT, interested in learning about India and its past, their own town or state or community and its history and culture, and so on. Quite a few such organizations exist all over India, started by Indians, but usually confined to certain fields – say  poetry, music, architecture, engineering, business, religion, politics, environment, food, social reform etc. The corona lockdown and the wide availability of Zoom, Google Meet etc, the free nature of social media like Whatsapp and Facebook in spreading messages and program notifications, the large number of domain experts who are eager and willing to share their knowledge has been a boon in this area.

For the last couple of centuries, Indology and associated subjects like archaeology, history, classical arts, etc have been the domain of academics, or a small class of people with either passion or leisure or both. Such a class is not elite by wealth, power or social status, as is quite common in most countries, including India, but by curiosity and eagerness.  The academic community worldwide and especially in India have a strong leftist bias (which bias is really barely a century old – religion dominated academia for millennia). For the last thirty years, there have been nationalistic and rightwing resurgences politically in many countries, and clearly so in India. Unable to capture academia, deeply skeptical of some of their leftist narrative, and fully availing of social media, different groups of rightwingers have challenged the narrative forced upon the public in textbooks and mainstream media. This has led to extreme factions in both groups, besides such extremely nonsensical but popular narratives like ancient aliens. Ramachandran’s vision, shared by Tamil Heritage Trust, is to look at the past and its meaning without such political filters, objectively. For that he believes, we need a new Indology Society, along the lines of the Asiatic Society of Bengal, established by Sir William Jones, is needed. And in his opinion THT is the foundation on which such a society can be built. “There are two people I admire, William Jones and Swaminathan,” stated Ramachandran. High praise, indeed!

Whether it is possible for anyone to have any opinion which conflicts with his or her political social economic or other such ideological prejudices, is not clear. But several attendees of our many programs have been quite delighted. Granted this is a small number. But their repeated patronage and attendance has been very encouraging. Our lectures during the lockdown have attracted an audience from all acorss India, not just Tamilnadu, and Tamils across the world. India Science Festival, based in Delhi, has expressed a desire to collaborate with us. Badri and I presented a lecture on Indian mathematics at their forum, in January. Swaminathan delivered a talk on Ajanta. Academics and professionals from across the world who attended these, and Ramachandran’s announcement of the society, endorsed and expressed a desire to participate. VS Ramachandran, Dr Rajesh Rao (one of the speakers at this Indology Fest) and I also participated in a panel discussion on Indian history and science.

My real interest in some of the early history and discoveries of Indology was provoked by Charles Allen’s book Buddha and the Sahebs. The British and European scholars who created institutions to scientifically and systematically study Indology lit for not just the world, but for Indians as well, a lamp of knowledge, methodology, curiosity and aesthetic appreciation, that has been carried on a large number of people both Indians, and other nationals, which we hope to continue. I write this after having watched on television, the lamp lit at Tiruvannamalai earlier this evening, and an array of lamps lit in a million houses across my city and state on this night of Karthikai deepam. How delightfully apt!

Here is an letter in Tamil about this conference (இந்தியவியல் திருவிழா), written by J Ramki, published in writer Jayamohan’s website. Incidentally, Jayamohan was the inaugaral speaker of our first Pechu Kacheri in 2011.

I hope you attend the lectures of the Indology conference which we are celebrating like a festival. They will be online and available as recorded video also. The invitation, schedule and topics are in the THT website and also shown here. Please register in the website and spread the word. 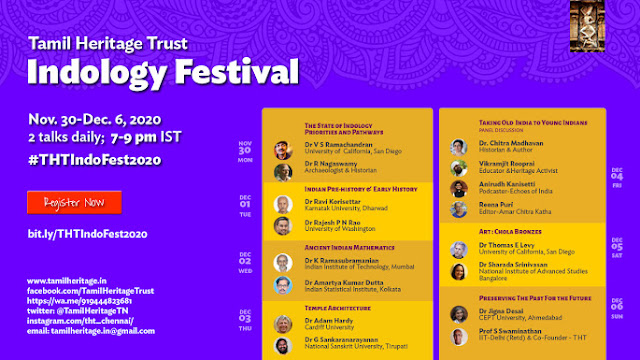