A Timeline of Sanskrit literature 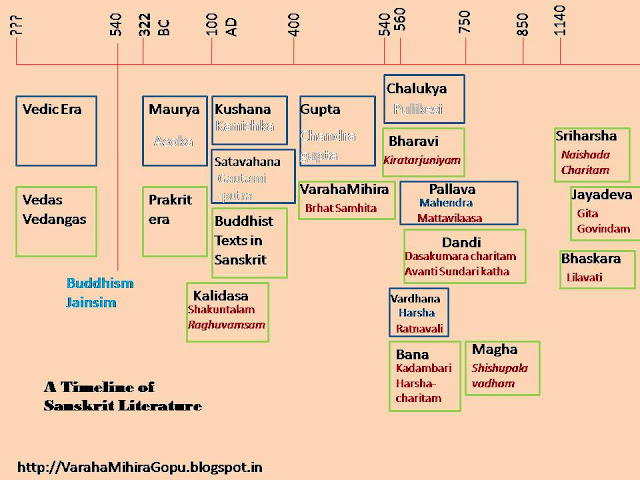 This is a rough timeline of some medieval literature in Sanskrit - this was borne out of trying to understand if there are connections between literature and sculptural art, during our Tamil Heritage Trust's October 2015 to January 2016 preparatory meetings for our Site Seminar of Chalukya sites, Badami Aihole Pattadakal and Mahakuta, which we just finished in January 2016.

Other works are considered LaghuKaavyas (smaller stories). A beautiful poem in Sanskrit links these poets and their styles with Dandi, a poet in the Pallava kingdom, who composed Dasakumara Charitam and Avanti Sundari Katha.


उपमा कालिदासस्य  भारवेः अर्थगौरवम् ।
दण्डिनः पदलालित्यं माघे संति त्रयंक्वचित् ॥
upamaa kaalidaasasya bhaaravEH arthagauravam
dandinaH padalaalityam maaGhE santi trayamkvacit
For metaphor Kalidasa
Profound Meaning, Bharavi
For  Wordplay Dandi …
Maagha, for all three!
I think timelines help us visualize or order history better than text,
or even tables. I've seen some timelines in history books, but they
are quite detailed and over such a long time period, so they can be
hard to follow for the general public. I wish historians of politics
and culture used timelines to help us understand some of these
events better. From what I have seen, historians of science and
technology use timelines well - but they rarely relate to them to
political or cultural history.

Correction: May 2, 2019 I have moved Kalidasa, composer of Shakuntalam and Raghuvamsham, from the fifth century AD to first century BC, which I believe is his correct time period.