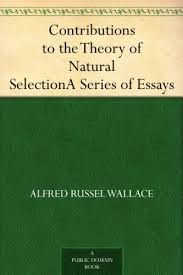 For almost  every biologist, Charles Darwin is the supreme scientist, the pitamaha of the field. Alfred Russel Wallace is almost always mentioned as an afterthought, the also ran. And invariably only as someone who also discovered Natural Selection. The story is more complex and I have written elsewhere about him.

Wallace not only lived longer, explored more places and animals, observed uniquely, imagine wider and wrote better. Not only did he write better than Darwin, he wrote better than almost any other scientist in any other field. And he wrote so well and so lucidly, unabashed in his firmness of thought and felicity of expression.

This collection of essays is one such wonderful example. I found it in the Anna Centennial Library, started reading an essay or two, and was struck with wonder. I didnt know whether to marvel at the English, at the flow of thought, the breadth and depth of observations and inferences, their significance to biology, or how almost nothing I had read in scientific literature is so simple or elegant.

After reading this I started reading other original sources in English. I discovered that JBS Haldane, Thomas Huxley, Stephen Jay Gould, Nick Lane and Matt Ridley are other authors who I could read and understand at first go. Strangely the other books and essays of Wallace are not so easy to come by. No bookstore stocks them, only some are in Amazon. I particularly took a liking to his essay titled the Philosophy of the Birds' Nests; even the topic should astonish and provoke curiosity.

The obscurity of Wallace and his neglect by the scientific community were governed primarily by atheists, and to some extent Marxists, capturing scientific laboratories, journals, academia, media, entertainment etc. Religion has been more successfully attacked, mocked and derided in the twentieth century than in all previous centuries combined. Wallace's experiments with spirituality, and his speculation that the unique evolution of the Human race could not have come along by natural selection alone, were an existential threat to the atheistic dogma that governs science nowadays. But that is a pity, because he was truly a marvelous writer.

I hope you read and enjoy this book.

Alfred Russel Wallace - my essay in the Indian Express series