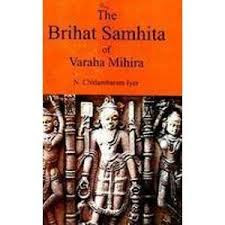 I stumbled upon Indian astronomy. And Varahamihira.

In 2004, I attended a series of weekend talks conducted by Dr Devadoss, an astronomer of Chennai, at the Birla Planetarium, Kotturpuram. It was about astronomy in general, but he mentioned the twenty seven stars in the Indian almanac and enumerated their English and Latin names. For the first time, the idea that India had a long and hoary history in astronomy that I was completely unaware of, struck me. But I didn't pursue it then.

At a series of talks by Dr Chitra Madhavan, on Indian history, at the Musiri house, I encountered Prof Swaminathan, who later gave a series of talks on the Oral Traditions of Sanskrit. This was a eye-opening, mind blowing, paradigm altering experience, as profound and as transformative as reading Sivakamiyin Sabatham or visiting Ellora.

Later I came to know that Prof Swaminathan and others were conducting a series of talks under the banner of Tamil Heritage Trust. He invited me to participate in a discussion about what other programs we could conduct. While others suggested Indian art, sculpture, painting, with such themes as Ajanta, Hampi, Tanjavur etc. I suggested Indian science, particularly astronomy.

"Wonderful", said Prof Swaminathan. "You give a talk on Indian astronomy". And he gave me a book titled Facets of Indian Astronomy by KV Sarma. Around this time, the mathematician and polymath N Balasubramanian (known to aficionados of tamil fiction as short story writer Nagupoliyan) announced he would start teaching Sanskrit. He had also attended Swaminathan's Oral Traditions lecture series at Badri Seshadri's invitation.

My father got suddenly ill and died around that time, on October 5, 2010. My astronomy lecture was scheduled for November 2010.

Preparing for the talk on Indian astronomy helped occupy my mind. Eerily, my father himself had to go to court regularly following my mother's death in 1981, and I suspect work helped abate the grief. For me also, preparing for this lecture, was a way to help dull the grief of my father's passing.

I searched for and stumbled upon several websites about the astronomy and mathematics of other ancient cultures during this time. My plan was to have a ten minute preamble about the Astronomy of Ancient cultures but I learnt a ton of stuff. Prof Swaminathan suggested that I turn it into two lectures, the first on ancient astronomy of other civilizations; the second on Indian astronomy. Which I did.

My first talk on Astronomy of Ancient Cultures went fine, if somewhat long, to a limited but attentive audience, with Deepavali fireworks exploding all around us. The second talk was postponed twice, to February, to accommodate Kathie Brobeck and Blake Wentworth, American speakers who were visiting India at that time.

In the meanwhile, my friend VSS Iyer gave me the soft copies (PDF files) of translations of ancient Sanskrit texts including Aryabhata's Aryabhatiyam, VarahaMihira's Brhat Samhita and Pancha Siddhantika, Bhaskara's Siddhanta Sironmani; and Surya Siddhanta. The Sanskrit classes of Balu sir were going along, and I visited the KV Sarma Library a couple of times with him. Balu sir, as a Sanskrit scholar and mathematician, had a deep interest in and knowledge of mathematics and astronomy in Sanskrit. He also personally knew KV Sarma and had interacted with him over the decades. He was well known among the Sanskrit/mathematics circle, especially by Dr Mamata Dash and Dr Sinirudhdha Dash, who were shishyas of KV Sarma, and then and now run the KV Sarma library and foundation.

And so I had a little more time to read the Sanskrit books and their translations at leisure. The mathematics and astronomy were in Aryabhata were delightful, if cryptic and confounding even for Balu sir. But the polymath Varahamihira is the one who struck a chord.

This was more about astrology than astronomy; but it really seemed to be about everything that Varahamihira could see or feel, on earth, not just in the sky. There were chapters on various planets.

No surprise, right? But also a chapter on Comets. Oddly, no other classical Indian astronomer discussed them. A chapter on planetary conjunctions. Rain. The star Canopus (Agastya). The consellation Ursa Major (Sapta Rishi).

Then it got freaky. A chapter on Diamonds, pearls, rubies. Chapters on Cots; Seats; umbrellas. Perfumes. Pimples. Temples.

Who else in the world could discuss pimples, temples, thunderbolts and planetary conjunctions in one single book?!? Not even Isaac Asimov. No wonder al-Beruni was flummoxed by Varahamihira, in a way no other he was not by any other Indian jyotisha.

The chapter on Agastya is the one that pulled me in hook line and sinker. Ten beautiful poems, extolling and adoring Agastya in marvelous metaphors and imagery, not distinguishing between the rishi and the star.

The crowning touch was a chapter whose English title is "On the praise of Women" (Stree prashamsa). It may drive any modern feminist into a wordless fury, and probably drove Vatsyayana to jealous sighs. One suspects that Chidambaram Iyer, the translator was very tentative in the translation of this chapter, especially the last shloka about the actions of Shiva, when the apsara Tilottamma came to worship Shiva and Parvati.

Another interesting aspect was his eclipse proof, in a chapter titled Rahu-chaara, which I have explained in this essay.

While the astronomy and mathematics in other Sanskrit books enthrall and delight with me their knowledge of and explanation of science and mathematics, it is the polymath spirit of Varahamihira and his unabashed delight in life and exposition as a rasika in Brihat Samhita, that captured my heart. And taught me, along with Richard Feynman and Alfred Russel Wallace, not to look at science drily and in detachment, but with delight and pleasure.