Near Mamallapuram, at Saluvankuppam, in the Tiger cave complex, there is a temple cave called Athiranachanda mandapam, built by Rajasimha Pallava. This has inscriptions, both Sanskrit poems, on opposite walls of its verandah, composed by Rajasimha, but in two different scripts - Nagari and Pallava Grantha.
Athiranachanda inscriptions

The first five stanzas are the same in both inscriptions. and begin with the phrase "Srimatho AthyanthaKaamasya". AthyanthaKaama is a favorite biruda (title) of Rajasimha, which he has also inscribed in Kanchi Kailasantha temple and in Panamalai Talagirisvara temple. The first four stanzas praise Siva. The fifth stanza of this poem says that AthiranchandaH, King of Kings (avanibhujaam patiH), built (akarOt ) this (idam) temple for Athiranachandeshvara; Let Pashupathi, eternally (niyata) delighting (kRtarati) dwell (bhavatu) here (iha), with (sahita) GiriTanaya (Paarvati), Guha (Skanda) and his ganas (gana)

While the rest of the Sanskrit inscriptions of the Pallavas, in Mamallapuram, are also in Pallava Grantha script, Rajasimha has used not only Pallava Grantha and Nagari, but also a calligraphic Nagari script in the Kanchi Kailsanatha temple.

In 1890, Archaeological Survey of India published all these inscriptions in South Indian Inscriptions, Volume I, edited by E Hultzsch. These are the transcripts used by almost all scholars in all subsequent papers, essays and books on Mamallapuram.

But in 1828, Benjamin Guy Babington, was assisted by someone he calls a "Jain Brahmana" (probably Jain scholar), whose name is not mentioned, who deciphered the Pallava grantha inscriptions at Ganesha Ratha. Babington was not aware of the Athiranachanda Mandapam, but was sent transcripts of this site by Colonel de Havilland. Colonel de Havilland, sent Babington THREE inscriptions of five stanzas - these include the two listed by Hultzsch, and a third one in an entirely different version of the Nagari. The text of this third inscription is exactly the same as the other two. Remarkably, none of the later papers or books on Mamallapuram mentions this third inscription.

When going through a book titled "Seven Pagodas of the Coromandel Coast", by Captain MW Carr, a large copy of which I saw at the library of the Madras Literary Society, on College Road, which included Babington's 1828 paper, I discovered (re-discovered) this forgotten third Rajasimha inscription.


This inscription cannot be found today - it is perhaps buried under and the ASI may have to excavate around the Athiranachanda mandapam to discover it. It must be remembered that most of the monuments at Mamallapuram were buried upto various levels and recovered by British Orientalists in the 19th century. Only a few years ago, a stone boar, a pillar and stepped pond were discovered next to the Shore temple. And the 2004 Asian tsunami uncovered fragments of a rock which since has been excavated and has revealed a large brick-built complex, perhaps a Murugan temple

Babington's paper also includes copy of a map made by Colin Mackenzie in 1808, which denotes two other objects near Athiranachanda mandapam, marked Inscribed Stone and Inscribed Rock. These also cannot be seen today, but transcripts of these inscriptions in Tamil are presented in a 1844 paper by John Braddock, William Taylor, Walter Elliot and George Mahon, also published in the book by MW Carr. At present, there are ASI monument marker stones, which may mark these.

The longer inscription, on the Inscribed Rock (described in Walter Eliot’s supplement to the Braddock-Mahon essay as “About 100 yards north of the Mandapam, is a mass of natural rock, No. 33 in the map, one end of which is covered in long tamil inscription. In 1840, sand was cleared away and a transcript made”)  is quite long, so I will give segments here.

Without a doubt, these identify the Saluvankuppam area which was called Tiruviziccaloor in Pallava and Chola period and only acquired the name Saluvankuppam in the Vijayanagar period. AadiSanDESvara may be the then prevalent name of AthiRanaChanDESvara – but since it talks of a Subramanya temple, perhaps not. Could this be the same as the rock revealed in the 2004 tsunami, which when excavated showed a large complex built of brick? This latter has a moderately long inscription, which I could not read in person or from photos, but the Mahon paper transcript seems far far longer. I believe that Mackenzie’s Inscribed Stone and Inscribed Rock await rediscovery.

The No. 33 inscription then describes a sale of land in some detail, because of a deficit in the treasury of the temple, which I will skip for brevity.

It continues with a list of signatories – of temple officials – and witnesses – of important people in nearby villages like Tiruporur, Siruthaavur, Paniayur, Visamoor and Mamallapuram.

Babington’s paper, though it has minor flaws, is masterfully scholarly and the work of a fine aesthete. He provides the earliest identification of the inscriptions as Sanskrit, translations of the inscriptions, their similarities, an aesthetic appreciation of the various exquisite sculptures, surprise that Goldingham overlooked those at Varaha Mandapam. His remark that the MahishasuraMardhini is the most dynamic Indian sculpture, will be disputed by very few, even though he qualifies with it the phrase “that he has ever seen”. His drawings, his tables of the Tamil and Grantha alphabets drawn from inscriptions at Mallai are invaluable. Separate tables for the Ganesha Ratha and Dharmaraja Ratha fonts are icing on the cake. His comment on Sanskrit language, as unchanging for long periods, is astute.

Mahon’s paper is a tour de force of global sculpture including those of Egypt, Petra, Syria, Persia etc. Interesting but not directly relevant. Braddock’s Guide is excellent and the perhaps earliest Geographical tour of Mallai, after Kavali Lakshmayya’s similar essay Telugu, which is included along with an English translation in Carr’s book. But ignorance of the Pallava dynasty, mention of a half-savage Jain tribe called Kurumbars, Adondai etc. stand in stark contrast how much more historians know now.

Hultzsch, Alexander Rea, Jouveau Dubreil, KR Srinivasan, C Minakshi etc must get great credit for giving us a proper decoding the history of the Pallavas as a pre-Chola dynasty, and a body of excellent scholarship.

Until 1962, most scholars believed that monuments Mamallapuram were built by 3 kings, "Mamalla" Narasimha, his grandson Parameshvara and his son Rajasimha. But in 1962, Dr Nagaswamy, Director, Archaeology department, TamilNadu, wrote a paper, titled New Light on Mamallapuram, arguing that Rajasimha was the sole author of all the monuments. He argued that the dating of monuments cannot be done on the basis of variations in pillar design, in scripts, or in architectural variations, but must rest primarily on inscriptions. Some scholars like Stella Kramrisch and DC Sircar agreed with him, while others were not so persuaded.

A later paper by Michael Lockwood and Gift Siromoney, published in their book Pallava Art, refutes Nagaswamy’s theory. The Lockwood-Siromoney article talks of Babington but only of two inscriptions, not three.

There are several books and papers which deal mainly with the sculptures, but not the authorship.

When I sent the photos of Rajasimha’s third inscription to Dr Nagaswamy, on April 15,2015, he was quite delighted and replied by email the next day. On April 17 we both visited the MLS library and perused the Carr book which threw up a couple of other surprises – including a possible line drawing of a temple at the base of the inscription at the Ganesha ratha. 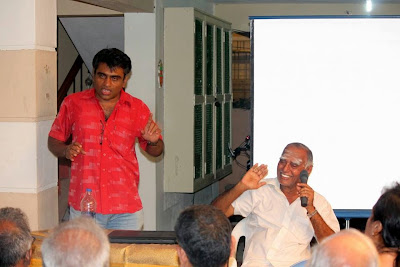 Dr Nagaswamy organized a presentation at his residence under the auspices of his Tamil Arts Academy, and was extremely generous in sharing the stage and asking me to give an introduction to the Babington and Mahon’s papers. Mr Vijayan, who works at DG Vaishnav College, and who does great service by voluntarily recording several book reviews at Gandhi Study Center, editing and uploading them to Youtube, eagerly recorded this program on May 6, 2015. The video is here.

Dr Nagaswamy believes that the rediscovery of the third Rajasimha inscription, adds strength to his theory. He encouraged everyone to take active interest in the heritage and continue healthy debate on this subject. "Nobody can have the last word," he emphasized.

I look forward to possible excavations by the ASI, and delightful revelations at Saluvankuppam.

In my own way, I felt as thrilled as William Jones and James Prinsep and Alexander Cunnigham and such others must have felt at their massive rediscovery of Indian history

"Supposd Ancient Place" marked in Mackenzie's map and "a monolithic temple for Varuna, between the Shore temple and the Mahishasura Mardhini rock" in Lakshmayya's paper are two puzzles which also intrigue me!

Thanks to Prof Swaminathan for introducing me to Mamallapuram
Thanks to V Chandrasekhar, Vaidyanathan Ramamurthy and Rajasekar Pandurangan for photos
Thanks to Vijayan for video recording
Thanks to friends and enthusiasts of Tamil Heritage Group, too numerous to enumerate, too generous to repay

Afterword
On May 21, on a second reading of Walter Eliot's Supplement, which is included in the Carr book, I notice that he has mentioned that the Kulottunga Chola inscription is included in an appendix in FW Ellis' "Treatise on Mirasi Rights". I read Ellis' Treatise and I confirm it.

Afterword 2
On a visit to Saluvankuppam on Saturday, May 23, I found Mackenzie's Inscribed Stone (marked as ASI monument stone No. 36) with the words "iccagatala tamaanaarkku" (இச்சகதலதமானார்க்கு)

VijayKumar, in Singapore, who blogs at PoetryInStone forwarded the video to Dr Michael Lockwood, by email. Dr Lockwood, author of Pallava Art, has engaged me in a delightful email exchange. Initially he was skeptical that there was ever a third Rajasimha inscription, but now he believes it's not an open and shut case. He has written too many things to summarize, but he points out that the Babington / Col de Havilland's transcript No 2 begins Stanza 5 incorrectly "Hima giri" whereas in No 3 it begins "Iha giri"

I received the following email from Dr Michael Lockwood, after he had read the Afterword No 2 above. I will leave the Afterword 2 unchanged for context. He writes:

"I realize now that I did not express my view to you clearly. I am still highly skeptical that anyone will ever discover the “third” distinct inscription that you are envisioning.
What I did come to the conclusion, after a careful examination of the three transcriptions in Carr’s book, is that I found nothing in the transcriptions with which to strongly twist your logical arm so as to bring you over to my view.
After 39 odd years of wrestling with Pallava epigraphical problems, some of my views rest on a kind of intuitional insight difficult, if not possible, to convey to someone else who holds an opposing view. Yes, of course I may be wrong, but I would, indeed, be highly surprised if that “third” inscription turns up!